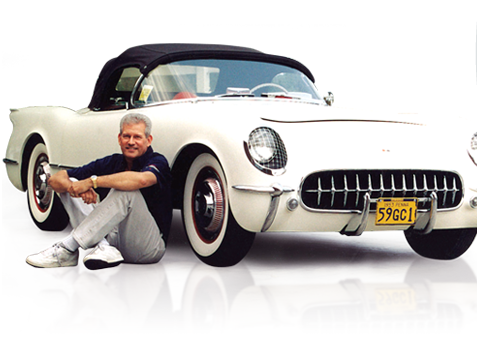 Chip Miller was always the “cool Dad” to the surfers in town.

“Not every parent in Ocean City was so supportive of surfing in those days,” said Nick Bricker, whose best friend growing up in the 80s and 90s was Chip’s son Lance.

“Chip bought a van and hauled us and our boards around wherever we wanted to go. We would load up the van and he would ask ‘where are we going today?’ and he would drive us there.  He would buy us breakfast and lunch and let us surf as long as we wanted.”

Lance said Chip was a great mentor, role model and as good a friend as he was a Dad. Father and son had many shared interests including performance cars, event promotion and family.

Chip’s passion for Corvettes and high performance cars led to his creation of the largest car show of its kind, Corvettes at Carlisle, at the Carlise Fairgrounds in Pennsylvania. He was also co-founder of the successful automotive event production company, Carlisle Events.

Chip amassed a large personal collection of Corvettes, including the first ‘Vette to win the famous LeMans Grand Prix in 1960. His acquisition of that prized vehicle and his dream to restore it and run a ceremonial lap around the LeMans course on the 50th anniversary of its win led to a documentary film, “The Quest.”

“Chip was an incredibly successful and wealthy guy, but if you didn’t know that, you would never guess it from being around him,” Bricker said. “He was a regular guy, and also one of the nicest and kindest people you could ever want to meet.”

“He would watch us (surf) on a cold day the whole time we were out,” Lance said. “When we were finally done he would meet up with us and give us hot chocolate.  He was that guy.”

In December 2003, Chip was diagnosed with a then-little known disease, Amyloidosis. Though treatable, Amyloidosis is also fatal if not detected soon enough.  Sadly, that turned out to be the case with Chip.

Lance, Nick and the Ocean City surfing, skating, and business community responded by organizing the Chip Miller Surf Fest and a number of other events to raise funds for Amyloidosis research, but mostly to raise awareness.

“If we are able to make people understand the disease and to receive an earlier diagnosis, it could save lives,” Nick said. “That’s really what these events are all about.”

Lance Miller said that simply put, the disorder is a rare one in which the body does not break down protein. As the protein builds up in the victim’s body, the organs ultimately fail.

The Millers sought out help at some of the best medical facilities in the country, including the Mayo Clinic. But they were told it was too late. In March of 2004, Chip passed away.

As tragic as Chip Miller’s loss was to his legion of friends and family, Lance said the events should be a celebration of his Dad’s life and should be a “big party.”

“We can have a great time enjoying Ocean City and each other,” Lance said. “At the same time, let’s make people know about Amyloidosis and that it does not always have to be fatal.”

As a result, the Chip Miller Amyloidosis Foundation was founded and the Surf Fest, now in its 15th anniversary year, became an Ocean City tradition.

“I’d like to say there is some grand surprise for the anniversary, but I would just say the main thing is, many of the children enjoying these events are the kids of people I grew up with. It’s a new generation and a legacy (of his Dad).”

July 20 – The Surf Fest Post Party, a commemorative “slide” and “Taste of Ocean City” feast at the Ocean City Water Park, the afternoon and evening following the Surf Fest.

July 27 – Skate Fest at the OCNJ Skate Park. This year’s event has an 80s theme and local police, fire and first responders will be serving food and helping to bring the community together in the name of Chip Miller and Amyoidosis research.

“It’s hard to believe the Surf Fest has been going on for 15 years, and it seems like just yesterday we were putting on the first one,” Bricker said. “As much fun as that will be, the post-event party is something we are really trying to promote.  When else can you go to the Water Park and not have to wait in line…and also enjoy some great food and drinks?”

Lance Miller’s wife Michele is coordinating the food part, which he said promises to be spectacular. He said currently as many as eight Ocean City restaurants will be contributing to the feast.

For complete details on each of these events, please visit the Chip Miller Foundation website at www.ChipMiller.org.

Donald Wittkowski - February 27, 2021
0
Deauville Inn is becoming one of the most desirable venues at the Jersey Shore for couples to say “I do” while savoring the gorgeous view. Overlooking picturesque Corson’s Inlet, the historic restaurant and bar in Strathmere is evolving into a top destination for weddings and other special occasions under its transformation by new owner Tim Fox. “We have the perfect sunsets at the Deauville,” Niguel Martinez, director of events and sales, said of the bayfront location for weddings. The Deauville is preparing for a particularly strong wedding season this spring as life gradually begins to return to normal with the emergence of the COVID-19 vaccinations.