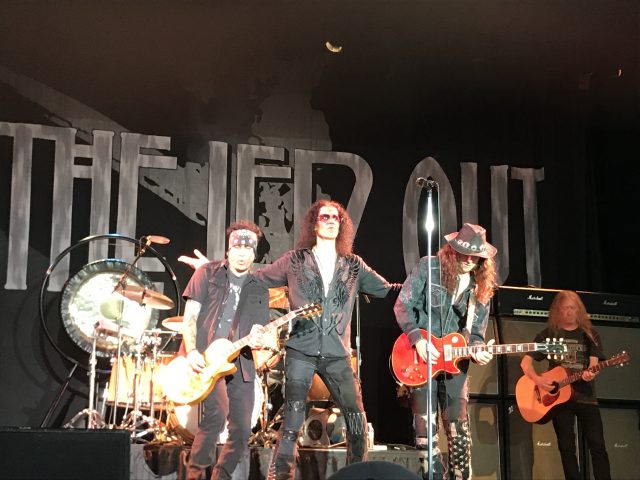 It’s still only June. Some kids aren’t finished school yet. But on the Ocean City boardwalk, summer is already in full swing. In this third season covering the Summer Concert Series for OCNJ Daily, show nights at Ocean City Music Pier feature familiar summer faces: Ellen manning the Information Desk, a plethora of returning seasonal staff at the box office and security, plus the omnipresence of the Bill Graham of South Jersey, veteran show promoter Bob Rose. Another familiar sight gracing the stage Monday and Tuesday night was Get The Led Out. The Delaware Valley-bred Led Zeppelin sextet are the best tribute band working. Packing the Pier for a pair of shows each summer is testament to that. 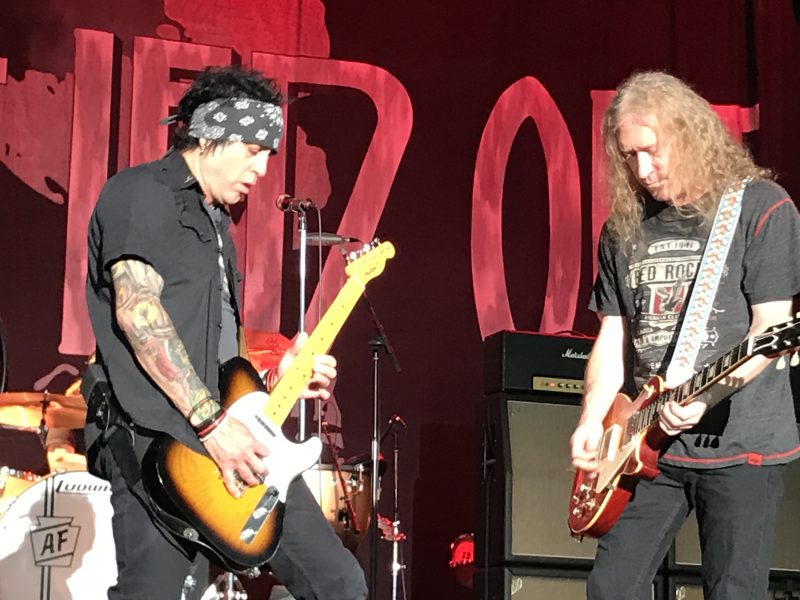 The crowd appeared split evenly between those seeing GTLO for the first time and return customers. As singer Paul Sinclair explained the first time he spoke to OCNJ Daily, the goal is to lovingly replicate the Led Zeppelin records generations of rock fans grew up cherishing. “The world is conditioned to hearing those songs the way they have heard them on classic rock radio, or on the albums they’ve owned since they were young”, says Sinclair.  He and guitarists Paul Hammond and Phil D’Agostino, bassist Jimmy Marchiano, keyboardist Eddie Kurek, and drummer Adam Ferraioli, give the people what they want.

A new wrinkle in the 2018 Ocean City Music Pier crowd was the Super Bowl Champion Eagle swag many patrons were sporting. The band, locals themselves, probably didn’t mind hearing a few “E-A-G-L-E-S” chants before the show, even in between songs early in the set. Get The Led Out was here performing the soundtrack to their tailgate. The attention to detail stopping on a dime for “The Lemon Song” break, or Sinclair nailing the high-end on “Hey Hey What Can I Do”, allows the audience to remain in step. The band and crowd know what’s coming next. Led Zeppelin’s live output (The Song Remains the Same, How the West Was Won), for better or worse, drifted from that blueprint.

The set list changes by Sinclair’s estimation, “60% night to night”. Without crunching the numbers, that feels accurate compared to their last visit. There’s a few staples you can expect in every GTLO show. You can count on a three-song encore, with the final two being “Stairway to Heaven” and “Whole Lotta Love”. Keyboardist Eddie Kurek getting a chance to flex on “No Quarter” is a safe bet. So is “Going to California” opening a mid-show acoustic set. Towards the set close, you will find yourself moving through “Kashmir”. The rest is anybody’s guess, while only the band is privy to that selection process.

Was opening Monday night’s show with “The Immigrant Song” purposefully coinciding with a topic currently inescapable in the news? Or is that propulsive “Hammer of the Gods” stomp just an ideal way to kick off a set? Who’s to say. But since many Zeppelin songs have titles that don’t seemingly correspond to the lyrics, it’s probably best not to assign additional subtext. The music of Led Zep is more about sonics than content. It’s the contrast of power and delicacy, from song to song, sometimes within the same one. A perfect example highlighted in last night’s set would be “Ramble On”. The band segued seamlessly from the bluebird lilt of the verse, to the driving crunch of its chorus. 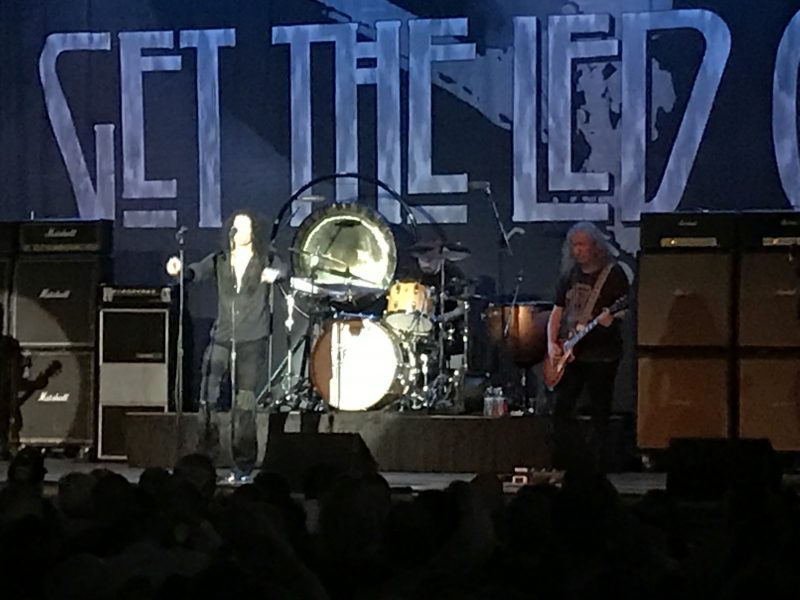 The audience ranged from high school kids born twenty years after Led Zeppelin broke up, to people who were in high school during the band’s peak. Mainland Class of ’77 grad and lifelong Ventnor resident Linda Wray is in the latter demographic. “I’ve been collecting Zeppelin vinyl since I was 14 years old, but I was too focused on school when I was young to get to a show”, she explains. That dedication to her studies would eventually earn her a Master’s Degree in Journalism. But by the time school was done, so was Led Zeppelin. Get The Led Out, forty years later, helped to fill in that gap for her. “This was my first time seeing anything Led Zeppelin-related, and I felt like they resurrected the records I used to play in my bedroom every night back then” gushed Wray.

Wray’s companion was her best friend since both entered as freshman, Mainland Class of ’77 grad Regina Dinotel. While Wray’s commentary came post-show, Dinotel’s enthusiasm was visibly palpable from the first song. There were multiple people dancing by the doors on either side of the venue, but Dinotel made by far the most noticeable boogie in the building. Late in the show, once the opening chug of “Bring It On Home” arrived, Dinotel’s train was traveling to the middle of the venue’s track. Some in the neighboring seats, along with Music Pier security, took issue with that. It was a difference of opinion that eventually resulted in her being escorted to the exits before the performance ended.

Shadowing crowd activity while taking in the action onstage, it seemed like a good time to be a buffer after a nearby Ocean City police officer entered the discussion. Cooler heads prevailed with some space between, once Dinotel left the pier for the beach, where Wray rejoined her following the set closer. “I had a great time. I understand where security was coming from if I was blocking anyone’s view”, Dinotel explained while outside as the encore could be heard faintly from the beach, “but in the moment I didn’t appreciate being reprimanded for dancing. I’m a Deadhead since the seventies. I love to dance, it’s my favorite form of exercise. And this band made me wanna dance all night long”.

As guitar virtuoso Paul Hammond was literally wrapping Get The Led Out’s show with a bow on “Whole Lotta Love”, a young girl named Elle was one of the kids out of school for the summer. Elle was on the boardwalk with a microphone, giving a performance of her own. While in the fall she’ll move onto fourth grade, she’s thinking about the big picture. Elle has approximately 15-20 of the greatest inspirational speeches in American history committed to memory. She will recite any one of them upon boardwalk passerby request. Satisfied customers can donate into a homemade tip-jar she labeled “college fund”.

As Elle stood outside perfectly reciting Martin Luther King’s “I Have a Dream” speech, you could hear drummer Adam Ferraioli’s last cymbal crash inside at the same time Elle was reaching the crescendo of “Free at Last”.  Applause erupted in the venue and broke out on the boardwalk. A few new college fund donations were made. Smiles abounded in both places. It’s summertime in Ocean City. Like Paul Sinclair exclaimed onstage during Get The Led Out’s set, “you know the words, so sing along with me”. 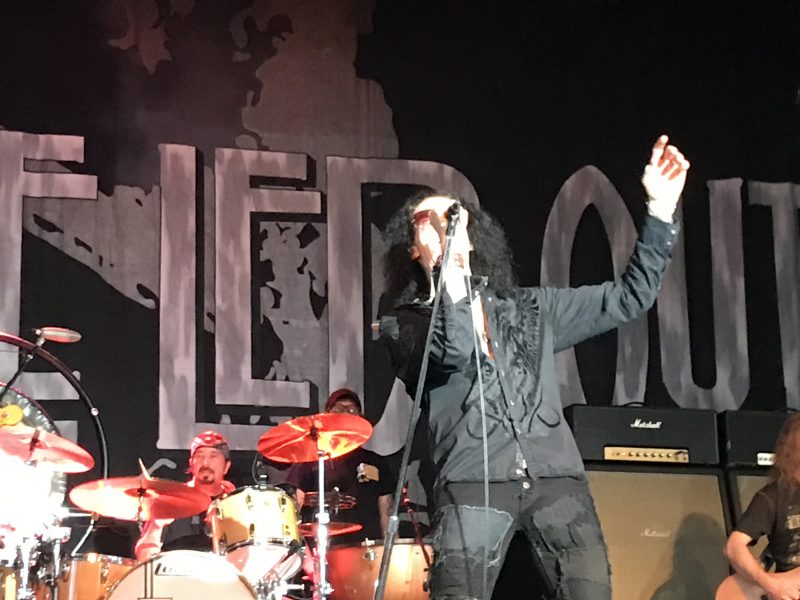