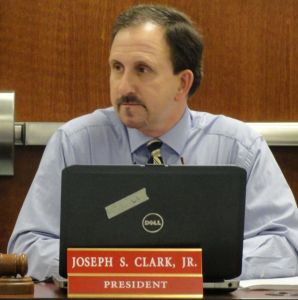 Joe Clark returns for another year as president of the Ocean City Board of Education.

Members of the Ocean City Board of Education reappointed Joe Clark as president and Tom Oves as vice president during the annual reorganization meeting Wednesday.

The appointments are for one year and represent the third time that Clark and Oves have been named to their leadership posts on the board.

In addition, Oves was one of three school board members sworn in Wednesday for full, three-year terms following their election in November. H. James Bauer and Jacqueline McAllister are the other two.

Oves, a retired teacher who helps run a family business on the boardwalk, is starting his third term.

Bauer, also a retired teacher, is a longtime member of the board. McAllister, a teacher in Egg Harbor Township, returns for a second term.

The board also swore in two new members who are filling unexpired terms.

Gregory Whelan, an attorney and Pfizer business executive, is occupying the final year of the school board seat left vacant when Pete Madden was elected to City Council.

The school board includes nine Ocean City members who are elected to staggered three-year terms and three representatives from Upper Township appointed to one-year terms.

As school board president, Joe Clark said one of his top priorities for 2016 will be to continue to focus on mental health issues and suicide prevention at Ocean City High School, which has had two students take their own lives in the past two years.

The work will be done through the strategic committee chaired by Clark. He said he plans to hold a series of committee meetings this year to seek public input from students, parents, educators, churches, law enforcement and other groups on ways to improve mental health and prevent suicide.

“We are asking a lot of people to come and weigh in,” Clark said in an interview Thursday.

Other major initiatives Clark will push in the new year include helping local parents prepare for the financial challenges of sending their children to college and working with trade unions on job opportunities for students who may not wish to pursue a college education.

Clark said he also intends to continue to lobby the state for changes in the School Choice program that would benefit students at Ocean City High School.

In 2013, the New Jersey Department of Education capped enrollment in the program. Moreover, funding for the program has been threatened by other changes made by the state.

The program gives parents the option of enrolling their children in school districts outside of where they live at no extra cost. It is designed to give students access to better schools.

In addition to their dispute over School Choice, Ocean City and Upper Township are also embroiled in a legal battle over their sending-receiving agreement for Ocean City High School.

The Ocean City Board of Education has denied the allegations in its own filing with Hespe. Ocean City insists that it has given Upper representatives full access to committee meetings, but they have had poor attendance.

Clark expressed hope that both sides can work out a settlement to end the litigation.

“At this point, we’re still open for dialogue,” he said.