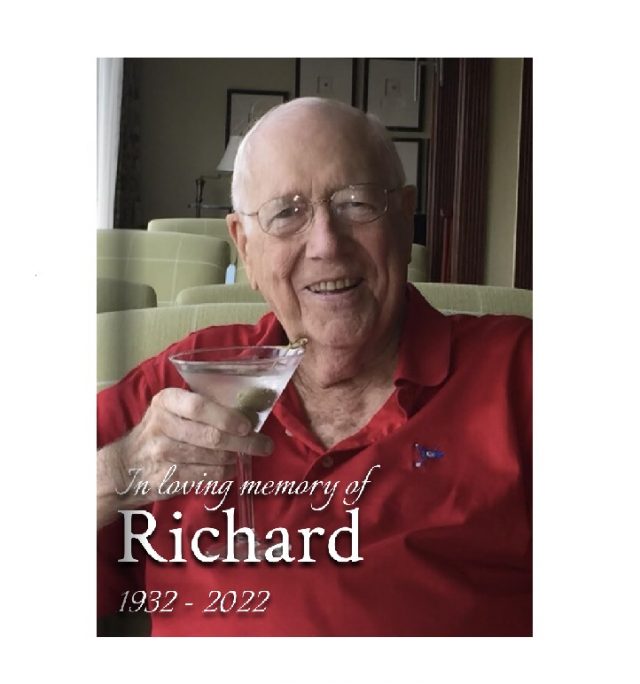 Dr. Richard Arthur Ely of Ocean City, NJ passed away on September 21st 2022 with his loving wife and children by his side. Born on March 13, 1932 in Camden, NJ to Florence Elizabeth (Yergey) and Arthur Eugene Ely of Collingswood, NJ.  He graduated from Ocean City High School in 1950 after an undefeated season as the captain of the football team. He went on to Princeton University and University of Pennsylvania Dental School, graduating in 1957. He entered the US Naval Reserves and was stationed at Pearl Harbor from 1957-1959. After returning from Hawaii, Dick opened his first dental practice in Woodbury, NJ where he practiced for two years. As an avid fisherman and boater, he moved his family and practice back to Ocean City in 1960. He went on to obtain his private, instrument, and commercial pilot licenses and loved to fly family and friends to many locales. Other sporting activities he pursued were duck hunting, skeet shooting, snow skiing, and jet skiing, but the true loves of his sporting life were his two 31 Bertrams; Happy Hour and Extra Dry!

“Doc” practiced dentistry at his home office for 40 years, where the coveted 4:30 appointment often led to cocktails in the back! After retiring, He and Nancy enjoyed living as snowbirds between Ocean City and Ocean Reef Club, North Key Largo, Florida for nearly 25 years fishing and snorkeling on the reef and hosting family get-togethers.
Dicks talents, interests, and hobbies are far reaching.  Fly tying, fishing lure casting, fishing rod building, knife handle making, jewelry designing, woodworking, photography, and gardening have all been passions over the years. He also spent countless hours designing and building projects in Santa’s Workshop alongside each of his grandchildren every year during the annual family Christmas Party. His love of technology allowed him to track his children’s travel adventures, follow his son’s fishing expeditions, and monitor the comings and goings around his house, all from the comfort of “Command Central” with his iPad in his living room. He was a loyal Philadelphia sports fan and enjoyed attending numerous Phillies games as a child with his father and sharing his Flyers tickets with family and friends.

Services will be held Friday, October 7th at 11 o’clock in the morning at The Godfrey Funeral Home of Palermo, 644 S. Shore Rd Palermo NJ, where friends may call from 10 o’clock until the time of service. Interment will be held in Seaside Cemetery following the service.

In lieu of flowers please make donations to the ALS Association of Greater Philadelphia in memory of his son-in-law Dave Bryan Jr.

Arrangements are by The Godfrey Funeral Home of Palermo. For condolences to the family, visit www.godfreyfuneralhome.com

The Godfrey Funeral Home of Palermo