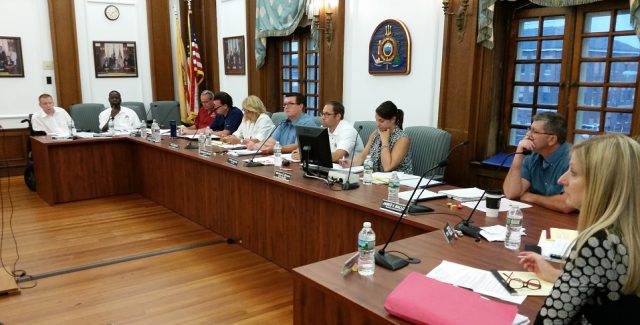 Ocean City appears to want the option to acquire, by purchase or condemnation, two more abandoned former gasoline stations as part of its campaign to remove blight from the main gateway into town.

An old BP station at the foot of the Ninth Street corridor was the first target. The weather-beaten BP building and its rusting gas pumps were demolished in June, after City Council agreed in May to buy the site for $475,000.

Now, the city appears to have its sights on the former Exxon and Getty stations that also mar the appearance of the Ninth Street artery, the primary route in and out of town.

At its meeting 7 p.m. Thursday, City Council is expected to introduce an ordinance to potentially acquire four properties on Ninth Street, including the old Exxon and Getty stations.

The neighboring Bud’s Marine Outboard property is also on the list of potential acquisitions. The old BP station is also included in the ordinance, although the city has already reached a deal to buy it.

The ordinance was a late addition Wednesday to Council’s agenda. It notes the city has the power to buy or condemn “any real property for a public purpose.” The ordinance also states that the city plans to convert the blighted properties into open space.

City spokesman Doug Bergen declined to comment on the ordinance Wednesday in advance of the Council meeting.

Mayor Jay Gillian and other city officials have long been worried about the impression the derelict gas stations have been making on visitors. The eyesores clash with the image Ocean City has cultivated through its “America’s Greatest Family Resort” tourism campaign.

The old Exxon station at the corner of Ninth Street and Bay Avenue is one of the first things visitors see as they enter town. The Getty and BP sites, on the opposite side of Ninth Street, confront motorists as they head out over the Route 52 Causeway bridge.

Gillian, as part of the city’s $98.5 million capital plan, has proposed spending $1.5 million this year to acquire private property for city use.

Council approved an ordinance last year that gives the city more power to condemn abandoned properties that are considered a nuisance. The three old gas stations inspired the ordinance.

As frustrating as the old stations have been for the city, at least one of them appears headed for redevelopment as a new office site for the Ocean City real estate firm Keller Williams.

Keller Williams agreed to buy the Exxon site for an undisclosed price, but has been waiting for the current owner to clean up the property before finalizing the deal. The company has announced plans to build a multimillion-dollar real estate office building on the property.

With the city now possibly prepared to acquire the same site and convert it into open space, it remains unclear what will happen with Keller Williams’ plans.

The Exxon site is known to be contaminated. In July, an environmental consulting firm that is overseeing the cleanup plans for the site sent a letter to surrounding property owners with new details about the petroleum-related contamination that was first discovered there in 1989.

Benzene and other chemicals that apparently stem from the old Exxon’s former operations have contaminated the groundwater, according to the letter. The groundwater contamination also extends 260 feet outside the property, the letter noted.

An investigation is being done to determine the level and scope of soil contamination at the Exxon site.

However, the letter says the contamination does not pose a danger to humans or marine life. Plans call for the contaminates to dissipate on their own.

Contamination at the Exxon site continues to be monitored by taking periodic samples of the groundwater. The results are sent to the New Jersey Department of Environmental Protection for inspection.

In the city’s deal to buy the BP site, the owner was required to remove the old underground gasoline storage tanks before turning over control of the land to the town. The owner also was required to test the site for possible contamination.

The city has not yet indicated whether it intends to impose the same requirements on the owners of the Exxon and Getty sites, if those sites are acquired.

In other business Thursday, Council is set to vote on a construction contract for a new fire station at 29th Street. The current firehouse, built in the 1950s, has been badly damaged by coastal storms in recent years and will be demolished.

Council is expected to award a $2.1 million contract to Straga Brothers Inc. of Glassboro, which submitted the lowest bid for the firehouse project.

To help pay for the new firehouse, Council plans to redirect $450,000 in funding from a 2013 bond ordinance that finances capital projects in the city.

In another key vote expected Thursday, Council will consider giving final approval to a nearly $19 million bond ordinance to fund a series of capital improvements. A public hearing on the measure will precede the vote.

Big-ticket projects in the ordinance include road and drainage upgrades for two flood-prone neighborhoods.

The city is planning $8.9 million worth of road and drainage improvements in the north end of town, as well as a new pumping station and outfall pipe, to help alleviate flooding. The boundaries for the project are roughly from First Street to Eighth Street and from West Avenue to Bay Avenue.

The city will receive a $5 million grant from the Federal Emergency Management Agency to help pay for the north end project.

In addition, the flood-prone area between 26th and 34th streets is in line for a series of road, drainage and pumping improvements. The bond ordinance includes $8 million to fund that work.