Cape May County is updating its Hazard Mitigation Plan, which Ocean City officials say is a valuable tool to provide much-needed funding to coastal towns, should a disaster strike.

The county will host a webinar at 2 p.m. on Sept. 10 for those interested in learning about the plan and how the county is working toward reducing impacts from hazards. The meeting will focus on hurricanes and flooding.

Tetra Tech, the county’s consultant, will explain hazard mitigation and how the county will update the plan.

“The important aspect is the existence of this plan and having it approved, which enables us to apply for hazard mitigation money,” Donato explained Saturday.

Post Hurricane Sandy, a lot of money became available through the county.

The city completed stormwater pumping stations and other flood-control improvements in 2019 from First to Eighth streets that totaled $8.5 million. Nearly $5 million of the money came through the county because of its mitigation plan.

Pumping stations are designed to intercept floodwater and channel it back into the bay much faster than it would normally take to drain off the streets after a coastal storm.

“We wouldn’t have been able to do the project without the funding. We don’t wish for disasters, but when they do happen, we can take advantage of funding,” said Donato, who also serves as Ocean City’s chief financial officer.

When making up the plan, the county works with all 16 municipalities. Ocean City, as with other communities, lists potential needs for projects and if there is money available, the county is already aware where it may be most needed and then allocated, Donato said.

“All 16 communities, along with other professionals and experts from our region, are involved in the massive update of this mitigation plan,” Cape May County Emergency Management Director Martin Pagliughi said in a county news release. “The 2021 plan update will identify all hazards that threaten our county. Certainly, this year everyone has learned when you think it won’t happen, it certainly will.”

Every five years it is required that the counties update their mitigation plan. It is supported by a grant from the Federal Emergency Management Agency (FEMA).

This update will be expanded to include new threats to Cape May County, including flooding threats caused by climate change and sea-level rise.

The county’s initial plan, approved four years ago, has served as a model for other counties throughout the state of New Jersey.

FEMA provided $125,000 in grant funding to the county’s updated plan based on the overwhelming success of the initial plan.

The plan will identify key actions to be taken to reduce or eliminate the long-term risk to human life and property from natural disasters such as floods, hurricanes and winter storms. It will be expanded to include other natural and man-made hazards, including pandemics, such as the coronavirus outbreak, according to the news release.

The update of this plan allows the county and participating jurisdictions, to continue to be eligible for future pre-disaster mitigation funding from FEMA.

Since Hurricane Sandy, the county has secured over $15 million in grants through the Hazard Mitigation Grant Program, and Flood Mitigation Assistance, due to the existence of the comprehensive hazard mitigation plan.

“The creation of this plan will prepare the county and our 16 member communities for future risks,” Freeholder Director Gerald Thornton said. “We have trusted, valuable stakeholders invested in this plan to truly mitigate future risk from sea-level rise, climate change, storms, and other disasters that may impact our county.”

For more information about the plan and to get the link to the presentation, go to: https://www.capemaycounty2020hmp.com/calendar/ 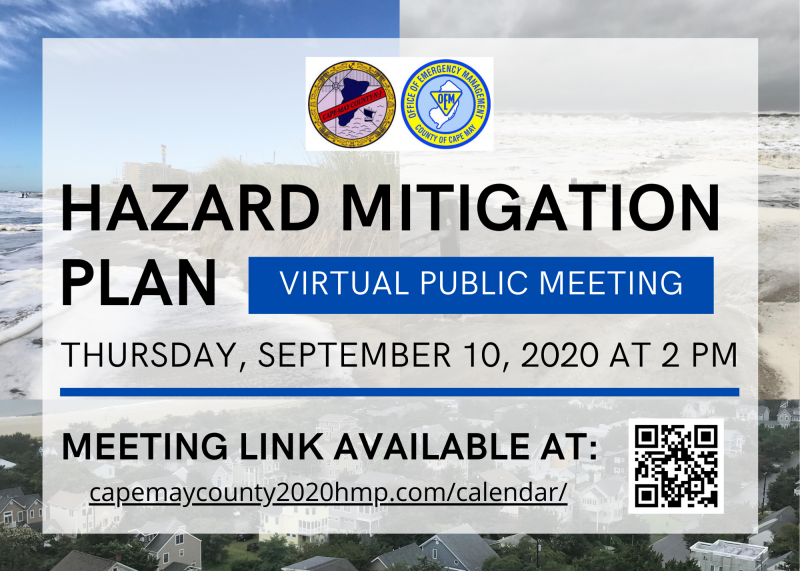 City Hall to Have Drop Box for Election Ballots

mvitale - September 28, 2020
0
The annual Ocean City Fall Block Party has been canceled this year due to the COVID-19 pandemic. But it doesn’t mean there won’t be plenty of opportunities for families who make the event an annual tradition to shop, shop and shop some more. This year, shopping enthusiasts don’t have to leave home to enjoy the best deals, discounts, and merchandise from merchants in town. On Oct. 9, Oct. 10 and Oct. 11, the block party will be offered virtually. Store specials will be posted, and customers can shop online if they choose or shop in person.