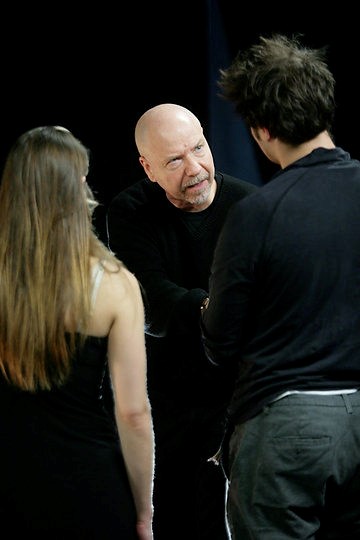 For many years Travis Preston has said that he is a director first, educator second. Renowned for his modern directorial style and Polish theater influence, Travis Preston is widely considered one of the great modern directors of the day. With his many awards and contributions to the arts, Travis Preston has long viewed his success as an educator as dependent on his work as an artist. Long before becoming Artistic Director of the CalArts Center for New Performance and Dean of the CalArts School of Theater, Travis Preston taught at a variety of international schools, including the Yale School of Drama, Columbia School of the Arts, New York University, the National Theater School of Denmark, Indiana University, Hong Kong Academy for the Performing Arts, and Harvard University. Today, Travis Preston credits his theater background, specifically his early work in Polish theater, as greatly influencing  both his directing work and his teaching.

While obtaining a doctorate in psychology at Indiana University, Travis Preston decided to leave his Ph.D program and pursue his lifelong dream of becoming a stage director. In 1975, Travis Preston applied to Yale School of Drama where he earned his MFA in Directing. It was during his time at the Yale School of Drama that Preston was first introduced to Polish theater through his work with the famous Polish film and theater director Andrzej Wanda. In recent years, Travis Preston has credited this meeting and his work on Andrzej Wajda’s White Marriage production for shaping his future career and directorial style. Shortly after graduation, Preston traveled to Wroclaw, Poland where he continued his Polish theater studies under Jerzy Grotowski and Ludwig Flaszen at the Teatr Laboratorium. It was during this time that Travis Preston became enamored with the Polish theater style of physical actions and corporals. Preston would go on to blend his Polish influences with a heavily contemporary style after studying under Grotowski on Mountain Project, a highly experimental project in the Polish forest. In 1980, Travis Preston would make his directorial debut at Wroclawski Teatr Wspolczesny with his production of Aeschylus’ Prometheus Bound.

After leaving the Teatr Laboratorium in 1980, Travis Preston began working with theater legend Robert Brustein, best known for his work as a producer, playwright, educator, and theater critic as well as for founding Harvard’s American Repertory Theater. At Harvard’s American Repertory Theater, Travis Preston would continue to develop his unique style of directing and would spend the next ten years directing classics such as The Ghost Sonata, Morning Become Electra, and The Seagull and the works of Norwegian playwright, Henrik Ibsen. Since his days directing at American Repertory Theater, Travis Preston has continued to explore his spectacular visual style in multiple productions, including the critically acclaimed Prometheus Bound at Getty Villa as well as his stage production of Brewsie and Willie. One of Travis Preston’s celebrated works was his groundbreaking production of King Lear which inaugurated the CalArts Center for New Performance in 2002. Travis Preston’s modern production of the Shakespearean tragedy challenged traditional interpretations by employing an all-female cast, utilizing unconventional technology and staging, as well as visual installations of a suspended car wreck. The production would go on to be nominated for five L.A. Ovation Awards, three NAACP Theater Awards, and was performed at Frictions Festival in Dijon, the international theater festival produced by Theatre Dijon Bourgogne.

Polish national theater has long held a distinct place in European theater history. From performances of early religious ceremonies to foreign plays that circulated throughout the Middle Ages, Polish theater has long been seen as exploratory, producing many pioneers of the art form since the 18th century. One of the great pioneers of Polish theater was Wojciech Boguslawski, considered the father of Polish theater; Boguslawski was a Polish actor, director, and playwright well known throughout the Polish Enlightenment for his work as director of the National Theatre, Warsaw. Although Polish theatrical development was halted during the period of partition that took place from 1772 to 1918, many of the country’s romantic master playwrights such as Mickiewicz and Slowacki continued to write throughout this time period, although their plays were not produced during their lifetimes. From the early 1920s to 1945, Juliusz Osterwa in Warsaw and Leon Schiller in Lviv began the Polish tradition of experimental theater. In 1956, post-socialist realism, the Polish avant-garde style became increasingly popular, and the Theater of the Absurd was explored throughout Poland. However, it was Jerzy Grotowski that brought international attention to Polish theater during the 1960s with his work which explored the nonverbal aspects of theater.

In 2000, Travis Preston joined the California Institute of the Arts faculty and established the CalArts Center for New Performance. The CalArts Center of New Performance, otherwise referred to as CNP, today serves as the production arm of the California Institute of the Arts and an environment for students to create and develop original theater, dance, media, music, and other interdisciplinary projects. Originally called CalArts Center for New Theater, CNP is known for its impact on national and international performance and today is an integral part of the alternative theater community. In his time at CalArts, Travis Preston has emphasized the importance of nonverbal acting and visual theater and used many different aspects of Polish theater within CalArts Center for New Performance productions. While working with Jerzy Grotowski, Travis Preston learned to recognized the importance of experimental theater and hopes to pass this on to his students. The discovery of innovative works and the development of unexplored concepts push forward the development of stage productions and allows artists to uncover new truths within the art form as well as their surrounding culture.