When Stephanie Carey was just a junior, she came up with an idea to help others enjoy the prom without the worry or the expense of purchasing gowns.

The Ocean City High School senior, who lives in Upper Township, solicited the help of her parents, Marty and Michele Carey, to come up with an event where prom-goers who couldn’t afford gowns could go to try on dresses that were free of charge.

That was last year, and amid the COVID-19 pandemic, there was no prom.

But on May 21, the high school will host a prom on the football field in Carey Stadium.

So, the 250 gowns that sat in the Carey household for a year will not be there much longer. For two days this month, the Sea Isle City Italian American Club will host an event that will allow students who need prom gowns to make an appointment and go there to try them on.

All of the dresses, many still with the tags on them, were donated by local businesses and ones as far away as New York City.

And all of the gowns were donated to help make someone’s memories of a monumental high school event not only extra special but in some cases possible.

“I feel like the dress is a huge part of the prom. You want the girls to feel confident,” Stephanie, 18, said in an interview Wednesday. “I spoke to our school and they were really supportive of the event. I wanted to get the best dresses we could for girls who couldn’t afford a prom dress.”

Stephanie found a location for prom-goers to try on and select their free dresses, which range in size from 0 to 24, by just asking around.

The Sea Isle City Italian American Club with Colleen Buch, the club’s president at the helm, offered to host a prom gown store in the club on April 20 and April 21 from 4 p.m. to 7 p.m.

Buch said that when Stephanie approached her about the idea, she thought it was wonderful.

Buch got right to work. She spoke with local businesses in Sea Isle and immediately, the merchants and community showed they wanted to help. She received not only people willing to donate their time to setting up the store, but also donations of hangers, clothing racks and more.

“There are a lot of different people coming together to help. It is going to be a special event,” Buch said.

She added that the dresses are “stunning.”

“Most of the dresses are long, but there are some short ones, too,” Buch pointed out. “If you can buy a dress for $250 you are getting a bargain, so to get one for free at this time is amazing. This is really something incredible Stephanie is doing.”

Buch, with help from volunteers, is setting up 10 fitting rooms in the Italian American Club. Social distancing will be followed. There will be 10 people allowed in the club at a time, each with a guest. Each prom-goer will have about a half-hour to select their gown.

“We plan on making it as special as we can,” Buch said.

All people have to do is email Ocean City high school nurse and Wellness Center director Jill Berenato at jberenato@ocsdnj.org to make an appointment to select their gowns at the Italian American Club, located at 309 JFK Boulevard.

“I’ll be excited when people start making appointments,” Stephanie noted. “I really can’t wait for people to start signing up.” 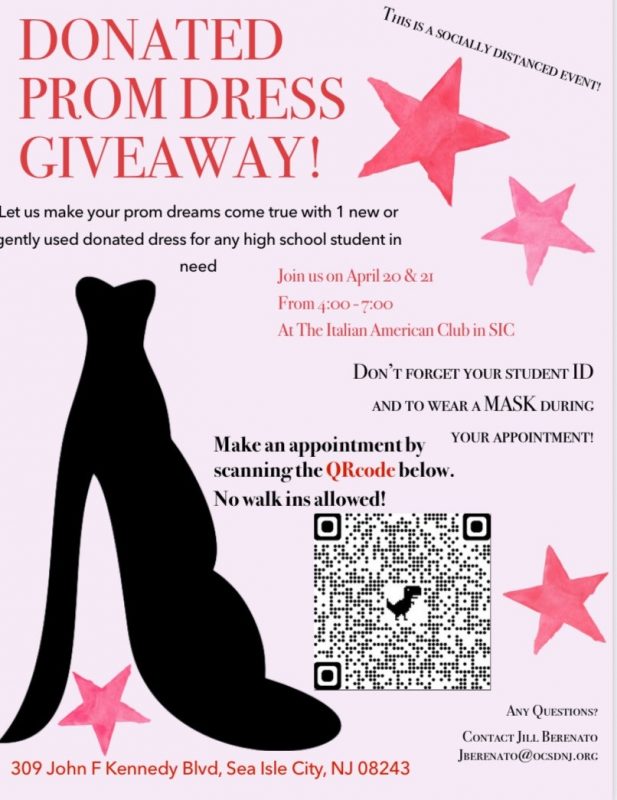