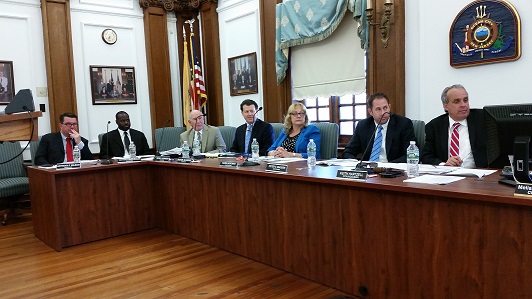 Some homeowners have parking lifts to protect their cars from flooding, while the lodging industry and vacation properties use them to alleviate parking shortages for their guests.

But it appears Ocean City’s experiment with mechanical parking lifts is coming to an end less than three years after they were approved for homes and businesses in a downtown area known as the hospitality zone.

City Council, at its meeting 7 p.m. Thursday, has scheduled a public hearing and final vote on a zoning ordinance that would eliminate parking lifts from the hospitality zone.

Under the measure, the lifts would no longer be allowed at hotels, motels, triplexes and quadruplexes. The owners of single-family homes and duplexes, however, could apply to the city’s Planning Board for a variance to have lifts in their garages.

The lifts were conceived as a way to satisfy parking requirements when the hospitality zone — so named because it is where hotels and motels are clustered — was created in November 2013. The zone is roughly bordered between Sixth and 14th streets, from the Boardwalk to Ocean Avenue.

City spokesman Doug Bergen said mechanical lifts are relatively rare throughout town. However, safety concerns have prompted city officials to consider eliminating them from the hospitality zone before any accidents happen.

Bergen explained there are fears someone could be injured if they try to operate the devices. The biggest concern is that vacationers staying at rental properties would be unfamiliar with how the lifts work.

“Do you want one-week vacationers to try to lift their cars and have children underneath them?” Bergen said. “Safety is definitely an issue.”

Bergen did not know exactly how many parking lifts are scattered throughout the city, but estimated it is only a small number.

Some homeowners who live in low-lying areas use the lifts to protect their cars from rising flood waters, Bergen noted.

Business such as hotels, motels and vacation rental properties have had the option of using lifts to satisfy their parking requirements.

In the weeks leading up to a final vote on the zoning ordinance, city officials have repeatedly said that the lifts aren’t a safe way to meet the parking requirements.

“They have decided that it’s not a good idea,” Bergen said.