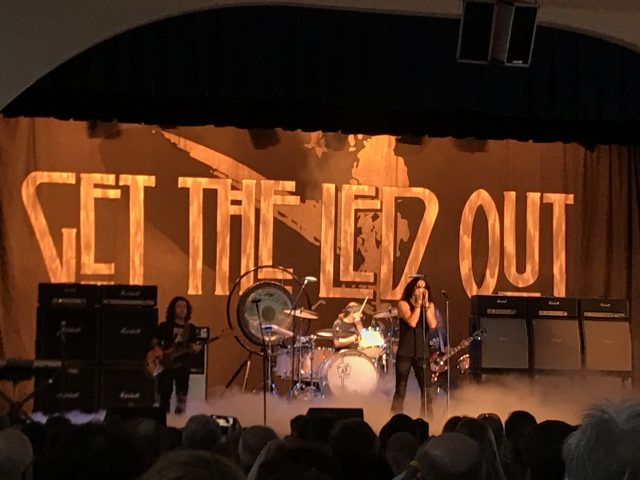 The two best cover bands in America are L.A.’s Black Sabbitch, and Philadelphia’s Get the Led Out, for disparate reasons. The former for injecting young, estrogen-infused, Sunset Strip energy to sludgy, gloomy British hard-rock. The latter for their meticulously detailed, hard-working approach, in replicating one of rock’s most celebrated catalogs.

This is our second summer covering Get the Led Out for OCNJ Daily, following two shows last summer. GTLO, online short-hand for Paul Sinclair’s preeminent Led Zeppelin tribute band, is back for another pair this year. It marks the sixth consecutive summer they’ve visited the Ocean City Music Pier, and fourth straight with multiple dates. They’ve become an Ocean City Summer Concert Series institution this decade, with good reason. 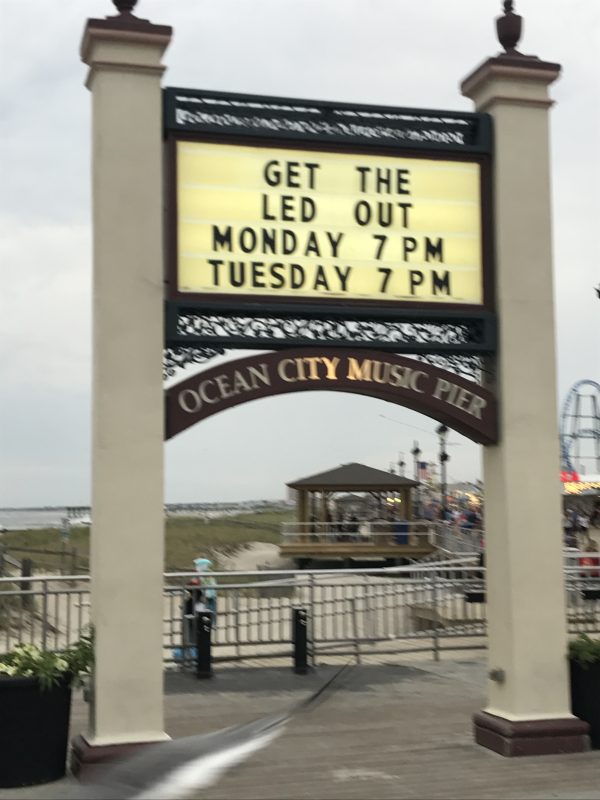 So how did things go in this go-round? Well, according to Frank Dobbins, a Philadelphia native making his annual weeklong Ocean City pilgrimage Monday night, “I’ve seen them ten times, tonight was easily the best”. Perhaps Dobbins’ unbridled affection, was him still basking in the afterglow of “Whole Lotta Love”. Who are we to judge? Get The Led Out certainly haven’t lost any intensity or precision since last seen here, in Summer 2016.

All the players from their previous six successful summer stints in Ocean City were back, doing what they do best. On “Going to California”, lead singer Paul Sinclair continues to hit notes well into middle age that Robert Plant hasn’t reached since his late twenties. Do-it-all multi-instrumentalist Andrew Lipke added sparkling keyboard flourishes to the end of “Thank You” on Monday, and beginning of “Your Time Is Gonna Come” on Tuesday. Bill D’agostino’s bass thumped with hard funk on “Nobody’s Fault But Mine”. Adam Ferraioli beat his bass drum with Bonzo-esque swirling fury on “Kashmir”. On “In The Evening”, Paul Hammond displayed the guitar greatness that earned him a chapter in Unstrung Heroes: Fifty Guitar Greats You Should Know. 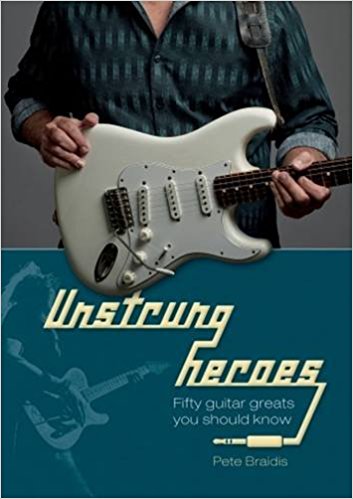 Once the PA system finished playing Aerosmith’s “Back in The Saddle” Monday, GTLO hopped into the proverbial saddle themselves. With the lights down, the familiar drum pound opening “When the Levee Breaks” came crashing down. By the time Jimmy Marchiano added a second slide-guitar to its crescendo, GTLO had begun making it weep and moan for the next two hours of show. 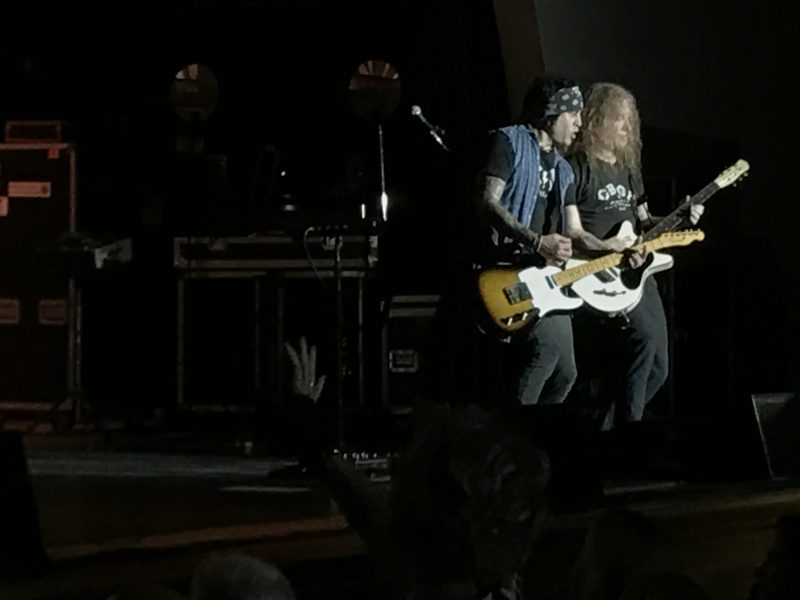 While any song from the Led Zep cannon was appreciated, some felt particularly fitting. Chiefly among them, “Down by the Seaside”, played with the sun setting over the ocean, directly outside the Pier. Another aquatically titled song, “Moby Dick”, was first to have the audience rising up like a wave as it concluded.

The by-request first encore slot, featured Physical Graffiti selections both nights: “Ten Years Gone” and “Houses of the Holy”. Vineland’s Stephanie Mancini, a first-timer on Tuesday, seated directly behind me, also registered the first complaint I heard either night. “These guys are incredible, but that is a terrible song to end on”, she lamented. Now a veteran of these evenings, I smiled and waited a beat. Moments later, the familiar acoustic guitar chords of “Stairway to Heaven”, the second in their customary three-song encore, began. With a surprisingly pleased laugh, Mancini exclaimed “OK, never mind!”, then settled in for more. When it comes to GTLO shows, another satisfied customer now knows. With a word, she can get what she came for. 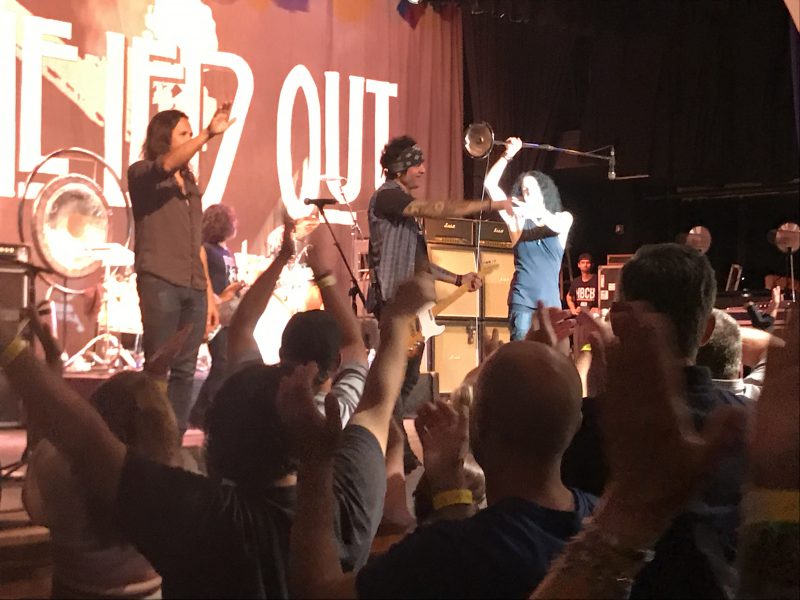 When The Levee Breaks
Southbound Suarez
Good Times, Bad Times
D’yer Maker
Down by the Seaside
Babe, I’m Gonna Leave You
Ramble On
Nobody’s Fault But Mine
Going to California
Battle of Evermore (with Diana DeSantis)
Tangerine
In The Evening
Moby Dick
Thank You
Heartbreaker
Living Loving Maid
Kashmir

Houses of the Holy
Stairway to Heaven
Whole Lotta Love

mvitale - February 26, 2021
0
Batters, look out. Ocean City High School’s formidable pitchers now have something else to give them an advantage. One of the baseball team's assistant coaches, Frank Coppenbarger, who formerly served as the clubhouse manager the Phillies for 30 years, recommended someone to upgrade the pitcher’s mound at the high school’s baseball field. Now, the mound is up to the standards of the team, which currently has four players headed to Division I colleges. Reflecting the strength of Ocean City's baseball program, other pitchers have played for Division I teams in the last few years.