Holiday shoppers zipped in and out of stores Saturday to buy last minute gifts, treats to bring to family gatherings, and even took time out for a carriage ride.

Jill and Chris Clark, of Upper Township, their son Connor, 12, and his friend Aiden Leypoldt, 12, strolled along Asbury Avenue to pick up a few things.

“We wanted to come to Ocean City to buy all local stuff today,” Jill Clark said. “We stopped at Wards to get some cookies. Now we are heading to 7th Street Surf Shop. They have really good stuff.”

Connor is hoping for a Nintendo this Christmas.

Linda DiFrancesco, of Ocean City, bought a pound of pretzels filled with caramel, to give to a friend.

Denise Oliver, of Seaville, opted for a super sweet convection, when she bought a box of chocolate covered Oreos to take to a party.

“I’m getting a Yeti cup. I’m going to put a gift card in it for my sister to get her car detailed,” Pat Flynn, of Ocean City said.

The hottest item at the surf shop is the Onewheel, like a motorized skateboard, it appeals to surfers because some say it feels a bit like surfing – only on land.

Delores Holzer, of Upper Township, spent the day shopping with her grandkids. They left Hoy’s 5 & 10 and were heading to a children’s store, but had to stop at the surf shop.

“I need to get some surf wax,” Holzer said.

Her grandchildren, Grace Malunow, of Robbinsville, and Jamie Holzer, of California, checked out some lip balm and trinkets while waiting for their grandmother.

Customers also stopped in City 2 Shore Gourmet. The assortment of Wisconsin cheeses, fine olive oils from around the country, balsamic vinegars from Italy, hot pepper jam, peanut butter and cheese spreads and gluten-free granola, made it a great stop for that special gift.

While some people were just picking up a few extra gifts, or sweets to take to parties and Christmas dinner, Dan Mactiernan with his children Cavan, 8, and Malley, 7, of Ocean City, still had a lot of shopping left to do for mom.

“I have two days to go and she’s all done with her shopping,” Mactiernan joked.

By Saturday afternoon, he had already bought her some gifts at B & B Department Store and Making Waves but was on a quest for something extra special. He and his family headed to Tah Dah in hopes of finding a little bling.

Erin Schiavo, of Longport, said she got exactly what she needed for her cousin from Blue Lotus.

“I’m all finished with shopping. That was the last present I needed to get,” Schiavo said. “I did a lot of shopping in Ocean City this season. I like to shop locally. I get everything I need and the selection here is eclectic.” 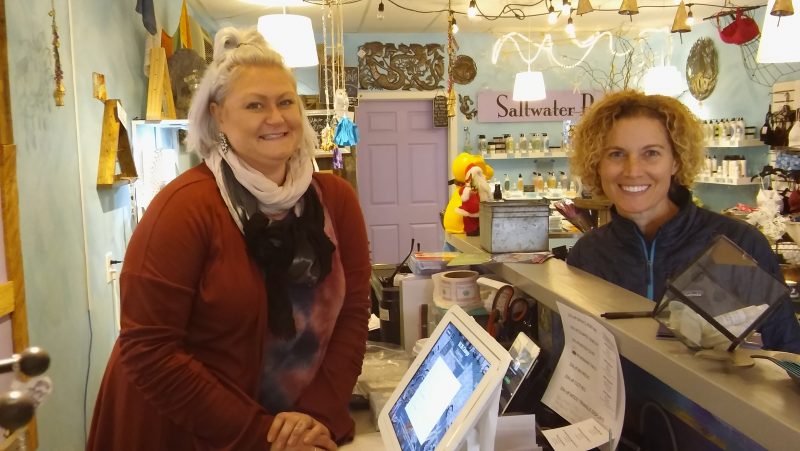