On a night that Ocean City High School honored a legend, its football team turned in a legendary performance in the opening round of the Group IV playoffs.

The Red Raiders improved their perfect record to 10-0 with a 41-7 drubbing of archrival Mainland following the dedication of the Tom Williams Press Box at Carey Stadium on Friday night.

Williams, an Ocean City resident whose career as a sportswriter and broadcaster spans six decades, called the game with his usual professional and entertaining style.

The game was entertaining as well, with the underdog Mustangs staying close throughout the first half and the Red Raiders capitalizing on an interception for their first TD and taking a 14-7 lead into the halftime break.

From there Ocean City scored 27 straight points to turn it into a rout.

“I thought we did a great job of blocking and tackling tonight,” Ocean City Head Coach Kevin Smith said. “We just wore them down with our physicality and we played fundamentally sound.  I’m very proud of the kids.”

It wasn’t as easy as the final score might indicate. The Mustangs came into the contest with a 4-5 overall record and lost their last two games. However, they were 3-2 on the road and they held a 28-21 lead in the rivalry’s history. Plus, it was Ocean City-Mainland, where the records coming in mean less than the on-field action.

As evidence, the teams were locked in a scoreless game until late in the first quarter when a Mainland pass was intercepted, setting up Jacob Wilson’s 11-yard TD and Brendan McGonigle’s PAT.

The Raiders made it 14-0 on Jack Hoag’s 11-yard run and the second of McGonigle’s five PATs. But Mainland bounced back on a 52-yard run by Ja’Briel Mace, with the PAT bringing the Mustangs to within one score.

Whatever Smith told his squad at halftime seemed to wake up an offense that had been slowed by penalties and a feisty Mainland defense.

A blocked punt gave Ocean City the ball back early in the third quarter, and three plays later Sean Mazzitelli scored on a six-yard run.

The Red Raiders added two more rushing TDs by quarterback Riley Gunnels and another 21-yarder by Mazzitelli. Between Wilson and Mazzitelli, Ocean City rushed for nearly 300 yards (unofficial stat) and four touchdowns, a tribute to the OC offensive line.

“It’s fitting that you would make this presentation, mayor, as it was your vision that turned this stadium into one of the great football settings in the state, and a great facility for other sports,” said Williams, who modestly thanked many of his colleagues and coaches he has worked with over the years.

He noted some of the great performances he witnessed from the press box that now bears his name, and that earlier in the day the Ocean City field hockey team and girls soccer squad also advanced in state championship competition.

“I can’t think of another stadium that hosted three championship events by the same school on the same day,” he remarked.

The win set up Ocean City for a second round game next Friday at home against the winner of the Long Branch-Freehold game Saturday. But Friday night was all about Ocean City-Mainland.

It was the fourth straight win for the Red Raiders over the Mustangs, Williams said during the webcast of the game.

“The last time that happened was in 1985,” he said, “when the quarterback for Mainland at that time happened to be Kevin Smith, who has built a great program at his old rival school.” 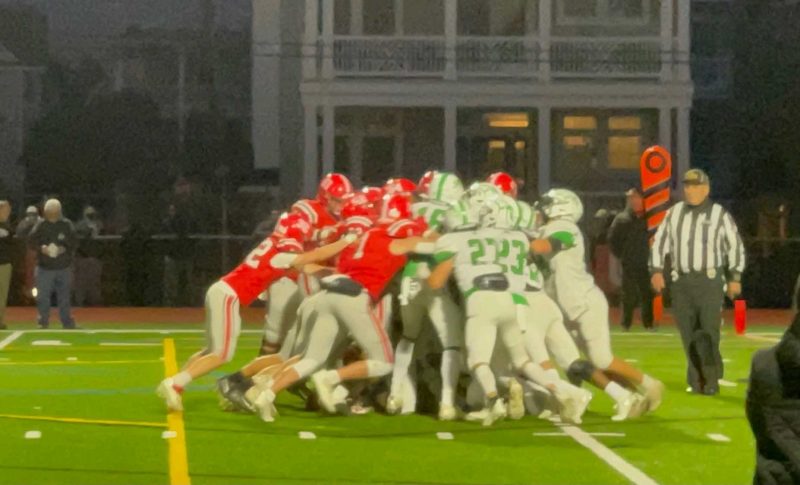