An Ocean City Councilman is scrapping his proposal to allow dogs on the beach during evening hours after opponents raised a stink about pooch poop.

“I’m withdrawing it because it’s generating a lot of controversy,” Councilman Keith Hartzell said in an interview Tuesday.

Hartzell said public opinion leaned slightly in favor of the proposal. But he noted that opponents were particularly “vehement” in expressing concerns about the possibility of dog droppings fouling the beaches.

Since unveiling his “dogs at dusk” plan at a City Council meeting in July, Hartzell has repeatedly stressed that it would depend on canine owners assuming the responsibility of picking up the poop.

He had proposed charging $10 for doggie beach tags to help defray the cost of installing waste bags and dispensers at the beach entrances. Under the plan, owners would have faced a $500 fine for failing to clean up after their dogs.

“At the end of the day, you would really depend on people doing the right thing,” Hartzell said.

However, opponents doubted that the owners would pick up the droppings or would even be able to control their dogs if they roamed free on the beaches, Hartzell explained.

Hartzell was unsure whether the city’s practice of mechanically cleaning the beaches each morning  — a process known as “raking” — would have removed any leftover dog droppings.

Hartzell’s proposal, meanwhile, has created a buzz on social media and attracted the attention of at least one prominent Ocean City summer resident since it was first reported by OCNJDAILY.com in a Sept. 8 story. 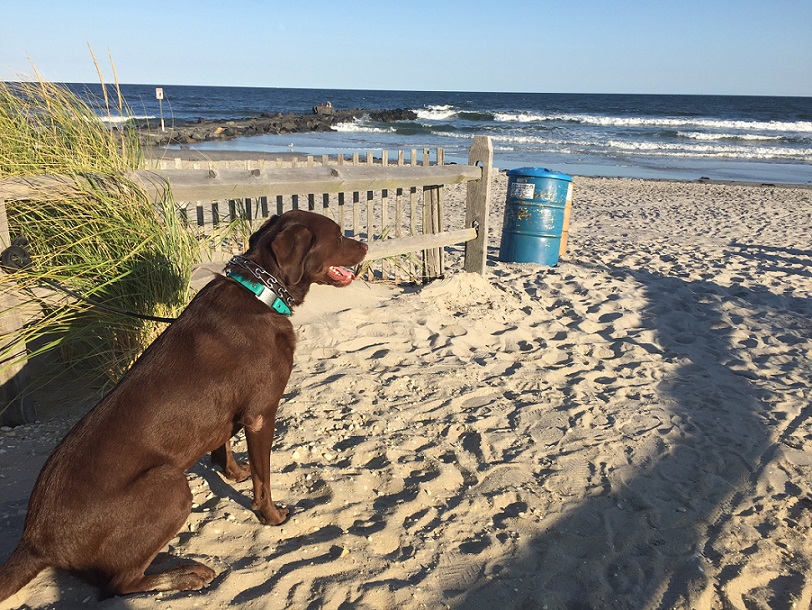 Former Pennsylvania Gov. Ed Rendell, who has a vacation home on the island and is often photographed with his golden retrievers, called to say he is “100 percent” in favor of allowing dogs on the beaches, Hartzell said.

“He contacted me and said he thought it was a great idea,” Hartzell said.

Hartzell has been following the public responses to his proposal via postings on the Internet, giving him a sense of the amount of support and opposition. He has also received emails and calls about the plan.

“More people wanted it than not, but it’s too controversial,” he said.

Hartzell noted he would be willing to listen to compromises for allowing dogs on the beach, but doubted he would revive his proposal in any form.

“I don’t see bringing it back at this point,” he said.

Hartzell proposed allowing dogs on the beaches between 6 p.m. and 9 p.m. By then, most sunbathers have left for the day and wide expanses of the beachfront open up for dogs to run and play on.

A self-described dog lover, Hartzell floated the idea as a way to attract more canine-owning tourists to Ocean City. He also said it would make the city more pet friendly for dog owners who live here year-round.

The plan, however, never made it beyond the discussion stage. Hartzell talked it over with his fellow City Council members, but did not introduce an ordinance to legalize dogs on the beaches.

Although Ocean City bans dogs on its beaches, a nearby mile-long stretch of sand on the Egg Harbor Township side of the Ocean City-Longport Bridge has become a popular spot for canine owners. Formally known as the Malibu Beach Wildlife Management Area, it is more commonly called “Dog Beach.”