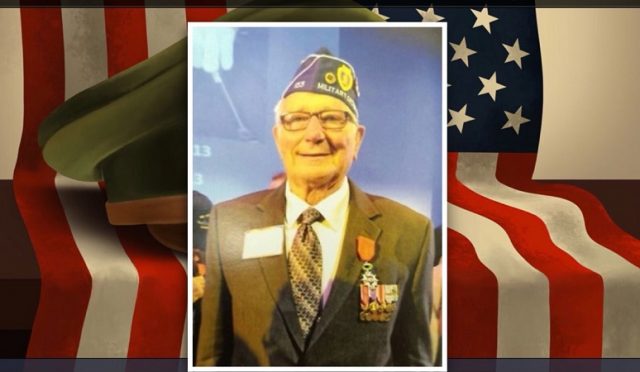 He was born May 4, 1922 in Philadelphia, PA to the late Angelo and Maria (Gambaro) Caserta. Joe was the youngest and last of a loving family of seven children, five boys, and two girls, and raised by a widowed mother. Beloved husband of 70 years of the late Eileen (Vandevere) Caserta.

During World War II he and his comrades led the way from Normandy to Berlin over 1,500 miles, 1,300 miles under enemy fire, during one of the coldest winters in 45 years, including the Battle of the Bulge, and the Battle of Cologne, which is the basis of the book Spearhead, and perhaps the most famous tank battle in history.

Tanker Joe earned the Bronze Star, Purple Heart, American Campaign Medal, World War II Medal, and European African Middle Eastern Campaign Medal. In 2013 he was appointed as Chevalier of the Legion of Honor by the President of the French Republic for his contributions to France’s liberation during World War II. Most recently he received the Distinguished Service Medal from the State New Jersey for distinguished service in the U.S. Army during WWII.

Returning from Europe, Joe opened an auto repair shop, and in 1975 expanded the business with a partner in the auto body and repair business. In 1987 Joe retired and moved with his beloved wife, Eileen, to Ocean City, where he and his family spent every summer vacationing there.

Also, during retirement he started to attend the 3RD Armored Division Reunions and met with many Veterans and their families, and for the first time in his life, he started talking about the war. That’s when the stories all started coming back to him. It also gave him an outlet and a chance to see old friends. At the end of each reunion the Veterans joined in song with one of his favorites “God Be with You Till We Meet Again”.

Joe and Eileen spent many years at their favorite spots in Ocean City, and also worked part time for another 25 years at a local new car lot, plus spent many a day and night at the VFW Post 6650 and the American Legion Post 524. In addition, he was very active participating in many activities including playing tennis at the 6th street Tennis Courts until he was 94, also participating in the annual Nights in Venice Boat Parade for more than 34 years with his sons, grandchildren, and friends.

In addition, many years were spent each morning beginning on Memorial Day and ending on September 11, for the ceremonial flag-raising and playing of the Star-Spangled Banner, including this past Summer.

Joe’s personality, humor, and friendship left their mark on so many people in his life. From childhood friends, fellow boaters, tennis players, business colleagues, the many Veterans he crossed paths with during his life, and most especially on his beloved wife, dearly loved family, friends, much-loved nieces and nephews. Joe was “one of a kind”.

His private funeral mass will be livestreamed on his obituary page at www.godfreyfuneralhome.com on Saturday February 20th at 11 o’clock along with his public graveside service at 1:00 PM.

Family and friends are invited to Joe’s Graveside Service at 1:00 PM on Saturday February 20th at Veterans Cemetery in Cape May Courthouse, NJ.

mvitale - August 4, 2021
0
Ocean City schools have not one, but two retired superintendents who will lead the district for the 2021-22 year as interims. Dr. Tom Baruffi became the interim superintendent in June. Longtime educator and administrator Mark Napoleon was approved as the high school's interim principal following the retirement of Dr. Matt Jamison. Baruffi will be in the temporary role while a nationwide search is conducted to replace Dr. Kathleen Taylor, who retired this month as Ocean City's superintendent of schools.