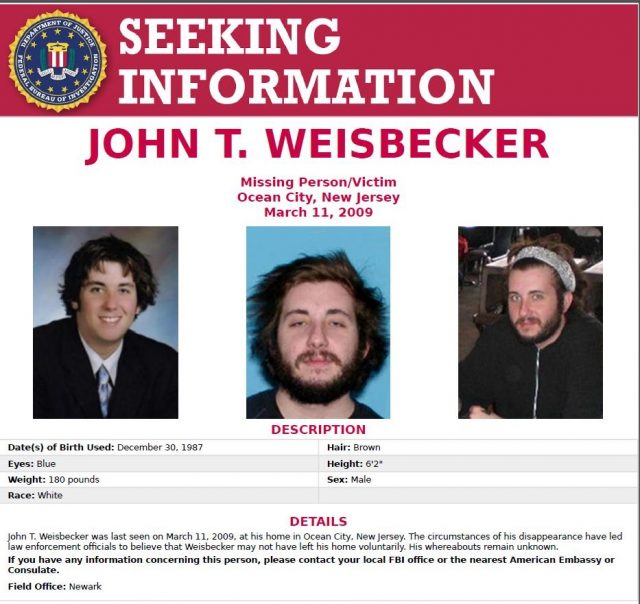 For Jen Powell, the years have not healed the loss she feels, and the questions she has about the disappearance of her son John Weisbecker from their Ocean City home in 2009 still remain.

And no one seems to know anything.

“I heard from the police on the 10-year anniversary of John’s disappearance,” Powell, 55, who moved from her Ocean City home in 2010, said in an interview Friday. “They usually call each year. They say they are looking into it. I just feel like I will never know. That is the hardest part.”

March 11 will mark 12 years since Weisbecker vanished from the home he shared with his mother and sister, Jordan, at 205 Asbury Ave.

He was 21 years old, 6-foot-2 with brown hair, a mustache and blue eyes. He also had numerous tattoos on his torso and arms at the time he just vanished.

Police believe someone else was with Weisbecker at the house. They said there were signs of a struggle inside the home the day he vanished, including overturned furniture. They believe he did not go willingly.

No one has seen the 2006 Ocean City High School graduate.

“Unfortunately, there are no new developments to report at this time,” Bergen said.

In 2016, Ocean City police turned to a Facebook page to begin soliciting tips about Weisbecker’s disappearance. In addition, a $50,000 reward is being offered for information about his whereabouts.

Powell holds on to hope that someday someone will come forward with information about her son’s disappearance.

“I know the officers weren’t happy because they think somebody knew something,” Powell said of the initial police work on the case. “I feel that way, too. I know it hurts them just as much that they couldn’t get the answers.”

She is thankful for her daughter, Jordan, 29, a married mother of two, who lives out of state.

Powell continues on for them.

But all the birthdays, family gatherings and other milestone events are without Powell’s son and Jordan’s big brother.

“He missed his sister’s graduation, her marriage, her two babies,” Powell said, holding back sobs.

And as the years go by, Weisbecker’s friends who once kept in touch with Powell have stopped.

“I don’t hear from any of them now,” said Powell, who lives in a town in the area but did not wish for it to be publicly disclosed. “It’s been too long. He had one friend who knocked on the door that day. He was one of the only ones who kept in touch for a bit and he passed away.”

Powell wants answers. As a mother, she said, she needs them.

“The hardest thing is not knowing,” Powell said as her voice cracked and she began to sob.

Anyone with information on this case is asked to call: