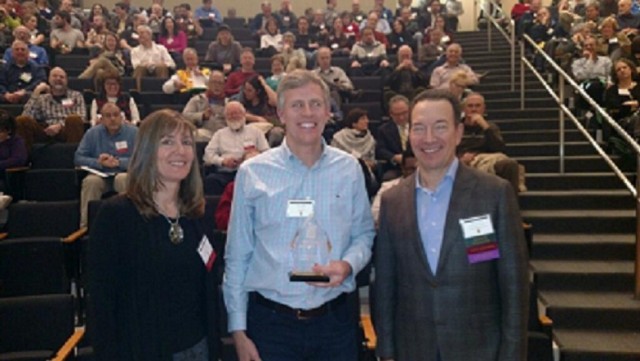 If you think Ocean City is a bike-friendly community, you’re not alone.

For the second consecutive year, the town’s forward-thinking attitude about bicycles and how they fit into the infrastructure and lifestyle of residents has garnered statewide attention.

“Bikes are recreation, but they are also transportation,” said Thomas Heist IV, a co-chairperson with Drew Fasy of the advocacy group Bike OCNJ. “When people use their bikes to get around, you don’t want to make them feel like second-class citizens.”

The flip side, he said, is Ocean City’s approach: re-designing street lanes and dedicating entire streets and paths to bike traffic, adding bike corrals and traffic signals, giving bike riders a voice, and much more. “If you create a space for people to ride and feel welcomed, it is win-win for the town.”

As a result, Ocean City received the statewide Advocacy award at last week’s Summit of the New Jersey Bike and Walk Coalition at Princeton University. The previous year, Ocean City was designated as a Bronze Level Bike-Friendly Community at the Summit, held in conjunction with the New Jersey Department of Transportation.

According the Fasy, this year’s award was especially gratifying because it centered not on theory, but actual implementation of numerous bike-safety, pedestrian-safety and “green” initiatives underway and embraced in Ocean City.

“I have to credit the town for the level of cooperation an understanding of what we are trying to accomplish,” Heist said. “The Mayor and Council, Police, Public Works, City Engineer, Chamber of Commerce, local businesses and countless individuals all worked very hard to make these things a reality.”

Last November, the New Jersey Bicycle and Pedestrian Resource Center weighed in on Ocean City, naming it a Top 10 Bike-Friendly community in the state in its annual report. “Ocean City is a model New Jersey Shore Town” for the measures it has taken, the report stated.

It all began in 2000 when the town first installed “Yield to Pedestrians” signage on many streets, which helped to change the mindset of drivers. From there, Ocean City became the first community in the state to use sharrows, the bike lane designation icons painted onto the streets. Another first for New Jersey was Ocean City’s dedicated “Bike Boulevard.” The Boulevard, Haven Avenue  from 9th to 34th St. links the Ocean City 9th St. Causeway and its bike-pedestrian section to the 34th st. Shopping and recreation district.  There are also designated bike lanes on West Avenue and West Atlantic. Very few towns boast such an extended traffic-free environment for riders and walkers.

Speaking of 9th St., the City installed a new HAWK traffic signal to allow a much safer passage across 9th by bikers and walkers. Also, “street quilts” of colorful designs and murals were painted at four intersections along the Bike Boulevard.  A program has added bike racks to all three public schools, at street ends near beaches and bike corrals in front of local businesses.  A bike map of town was developed and is available at City information centers and the Chamber of Commerce.

“Varsity Inn was the first to install a bike corral and they’ve been really happy with the results,” Heist said. “It has been demonstrated that people will stop at more businesses when they are on bikes than when they are in a car. Ocean City is a town of little restaurants, shops and all kinds of nooks and crannies.  These places are much more accessible on a bike.  Plus you have the added benefit of endorphins kicking in.  It’s a nice way to get around.”

All of these measures are part of Ocean City’s Complete Streets program, designed for a harmonious relationship between cars, bike and pedestrians. This is not to say there still isn’t room for improvement or that traffic issues don’t exist, especially in the summertime.  However, people are a lot more aware and cooperative with the “share the road” movement than they were prior to the existence of BikeOCNJ.

Education is another important aspect of BikeOCNJ.  In addition to bike racks at school, the group has published safety pamphlets, and organized group rides called the Riding School Bus which gathers students, parents and teachers for the ride to school. There are also “town meeting” type gatherings in which riders tell the coalition about what they like and don’t like about biking in Ocean City.  The feedback lets BikeOCNJ guide its agenda moving forward.

All in all, it adds up to a new attitude and awareness about utilizing our streets and roads for the benefit of everyone—Ocean City style. 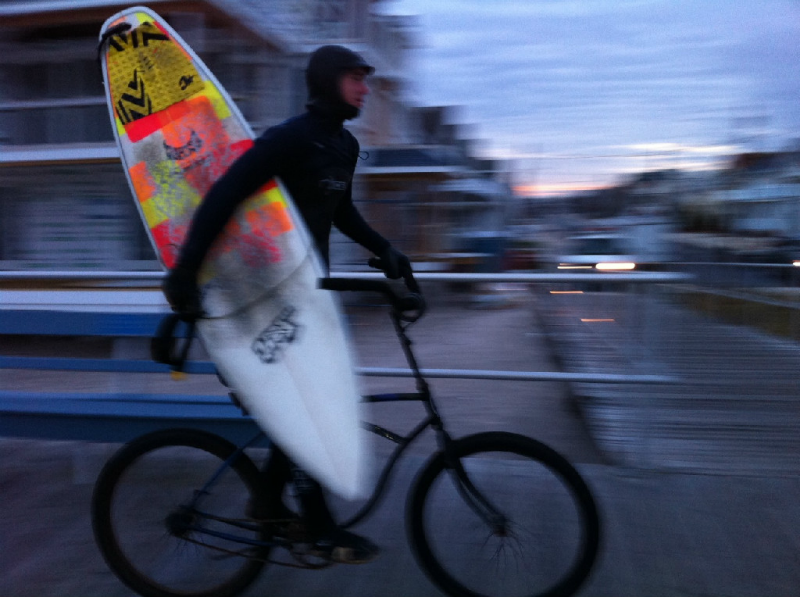