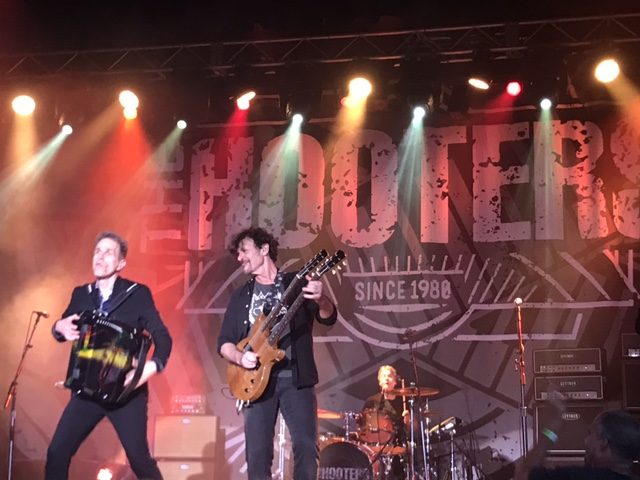 It’s hard to fathom that Philadelphia’s The Hooters have been together for 37 years. All with essentially the same core group that opened Live Aid in 1985, at a long since demolished stadium in South Philly called JFK. Granted, they lost a few bass players, before settling into a groove with Fran Smith in 1987. Sure, they bolstered their current sound, with a younger guitar maestro in Tommy Williams, at the dawn of this decade. But fundamentally, the band visiting the Ocean City Music Pier, for two sold-out shows in Summer 2017, were the same stellar lineup of multi-instrumentalists long-time fans had first seen play. 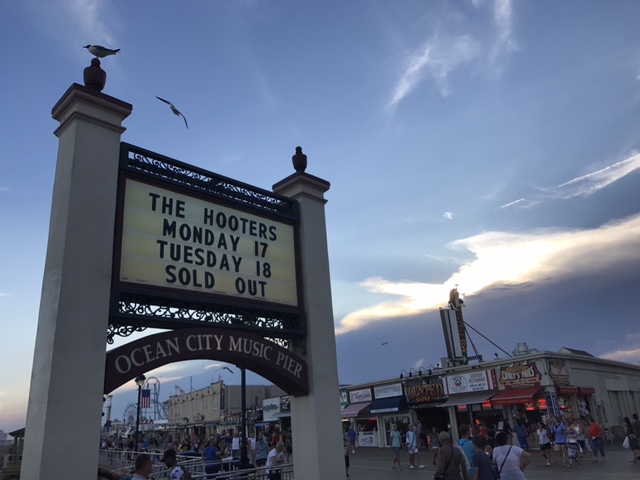 It was shortly after 7 PM, when the reggae playing over the PA began to fade, and a familiar face walked out onstage. It was 93.3 WMMR’s Pierre Robert, the first DJ to champion the group on major-rock-radio in the early eighties. Robert, who has been a Philly radio staple for about as long as The Hooters have been a band, wore his old 1983 Hooters shirt. He’d resurrected the shirt for the occasion, and was grateful that “I still fit in it”. Before ceding the stage, he exclaimed, “you’re about to find out, these guys sound better now, then they did in the eighties”. 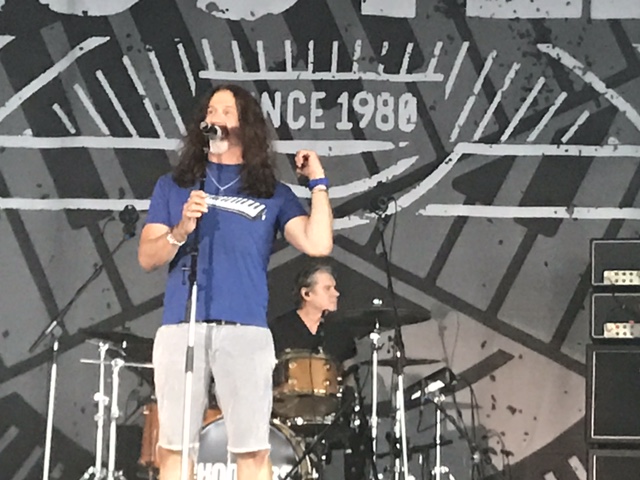 Was this hyperbole? Tough to say. I was a bit too young to catch them in action during their first few years. But it was clear from the onset, a cover of Barry McGuire’s protest anthem “Eve of Destruction”, into their joyfully defiant “I’m Alive”, that The Hooters were going to try to prove Pierre right, all night. A string of hits locals had heard on WMMR, or saw on MTV during the mid-eighties, followed. “Hanging on a Heartbeat” shifted seamlessly into “Day by Day”. The latter sent many patrons inside the packed house dancing out into the aisles. 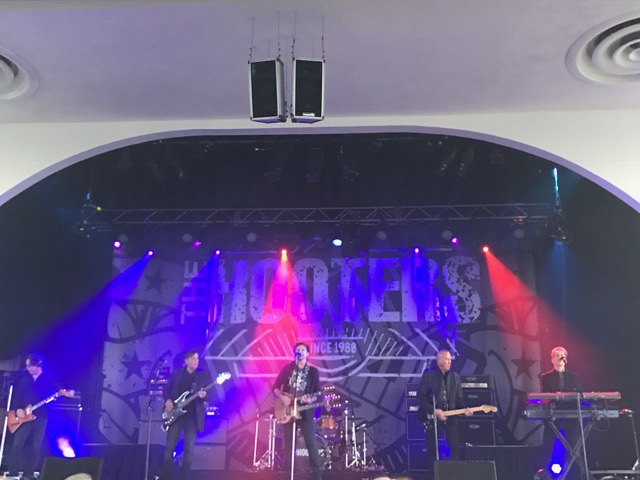 The dub-reggae from the pre-show PA, returned to the mix with hypnotic effect, on “All You Zombies”. How many touring bands, with a 37-year-pedigree, are giving you protest-folk music, pop-rock and roots-reggae, all within the first half-hour of their show? None that I know. That’s before we even get to co-founders Eric Bazilian’s double-neck guitar/mandolin playing, or Rob Hyman’s keyboard/organ and melodica use, as each trade off lead vocals and harmonies. 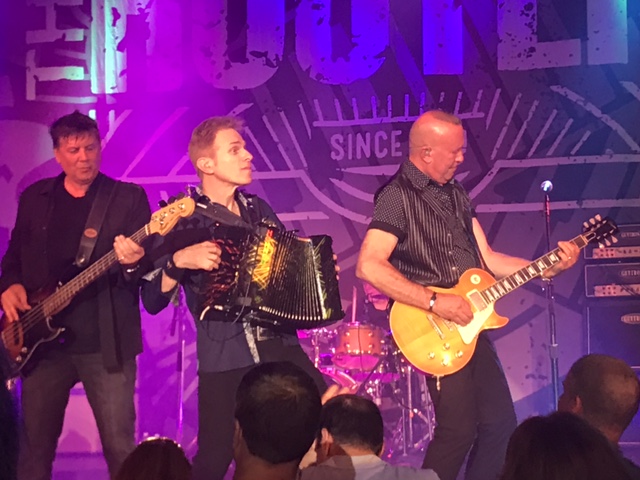 The first of a pair of capacity Ocean City shows, represented a homecoming of sorts. They’d been back home about a week, following a successful two-month stint of summer festivals and theaters, in Switzerland and Germany. The band had already worked up a lather before taking time out to address the audience to ask Ocean City how they were doing. Less of a lather, however, then they’d been recently accustomed. 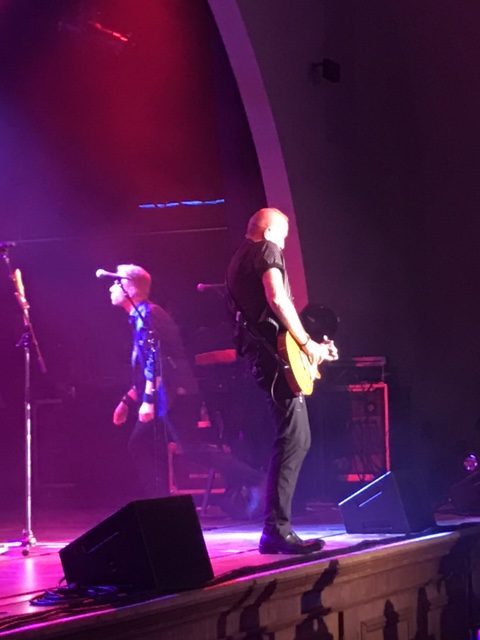 “When people ask me, what’s the biggest difference between touring in Europe and playing back home? That’s easy…air conditioning”, quipped Bazalian. “It’s good to see so many old friends, in one place, at the same time, thanks for welcoming us home”, added a visibly appreciative Hyman. 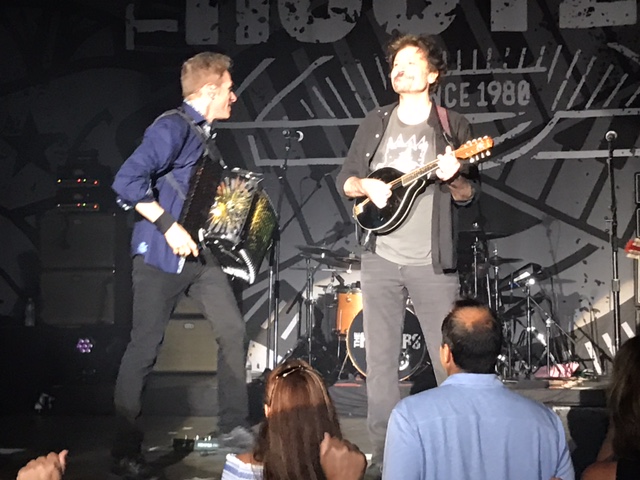 Cooler conditions prevailing, The Hooters were just warming up. The set list was a mix of eighties favorites and relatively recent fare. There was “South Ferry Road” and “Where Do The Children Go” off their double-platinum breakthrough, Nervous Night. They intermingled naturally with later era work like “Morning Buzz” and “Twenty-Five Hours a Day”. There was a few choice covers as well, like their adaptation of Hedy West’s “500 Miles”. 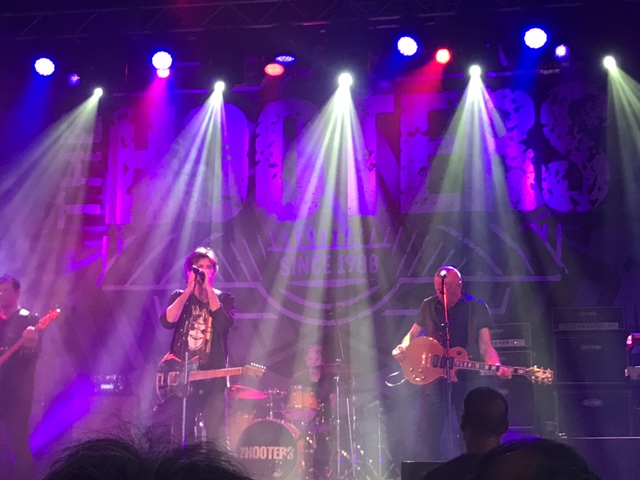 Their take on The Beatles’ “Lucy In the Sky with Diamonds” started promisingly, but sans drum-kick, the payoff felt a bit lacking. Conversely, their mandolin re-imaging of Don Henley’s “Boys of Summer”, built steadily and resonated deeply. It’s doubtful Henley himself could top The Hooters’ arrangement in a live setting right now. This also provided an opportunity for the crowd to sing along. Bazilian predicted they would, introducing it as “a song that was probably bigger than anything we ever wrote”. By the final verse, his words proved prophetic. Taking a break from singing, the band let things breathe to allow the audience’s voice to fill the empty spaces. 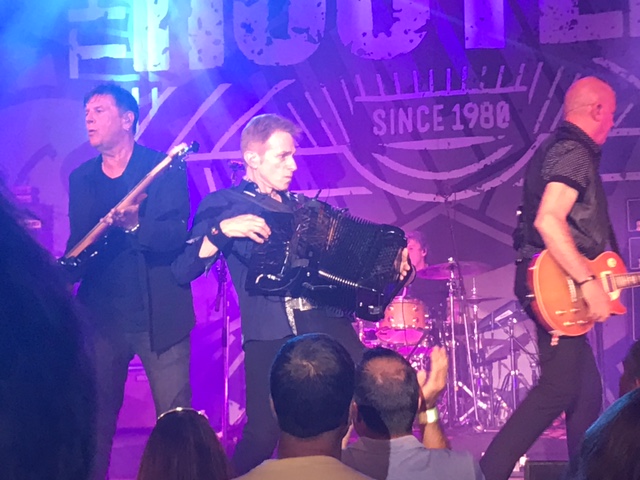 “Satelitte”, off 1987’s Long Way Home, was only a modest hit in the United States. It was, however, a Top 20 pop charter overseas. Perhaps playing the song to enthusiastic European audiences the past two months, had emboldened their performance of it back home. Maybe it was the light show, befitting its lunar lyrical allusion and having an immersive effect, now that the sun had fully set outside. Whatever the reason, “Satellite” was the runaway highlight of the evening. 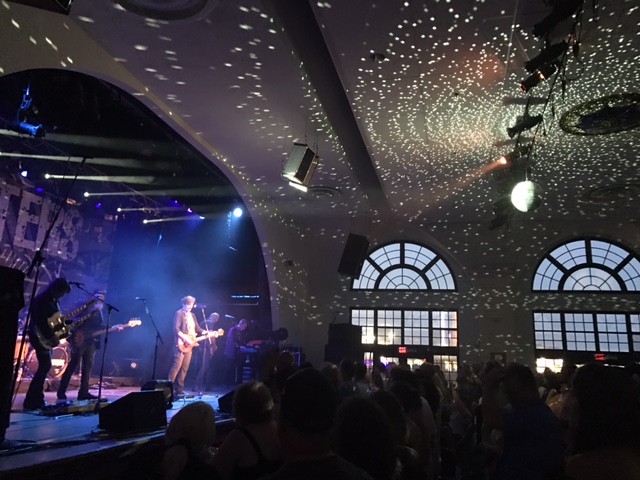 Sparks continued to fly afterward. “Johnny B” featured Bazilian on flute, floating in between a crunching three-guitar attack. How many instruments do each of these guys play?!? Everyone aside from hard-hitting drummer/founding member David Uosikkinen, played at least three each. During extended flute solos on  “Johnny B”, Bazilian played on one leg, in loving, winking homage to Jethro Tull’s Ian Anderson. John Lilly, formerly of Robert Hazard’s Heroes before joining The Hooters in 1983, delivered a blistering guitar solo. The Tull nod felt appropriate, since a four-minute single in 1987, has now evolved into a prog-rock opus. 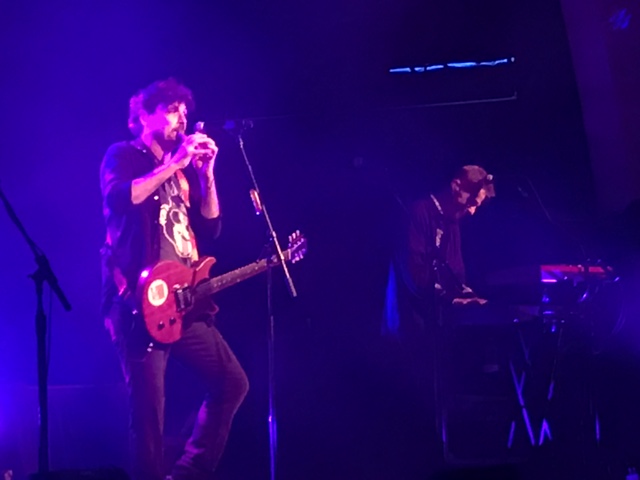 Once Hyman’s trademark Hohner melodica line opening “And We Danced” started, whoever wasn’t already out of their seat, soon was. The biggest, most enduring hit of their career, it would be difficult for them to close any other way. Most of the crowd could’ve headed home happy from there. They’d seen a two-hour show and gotten their anthemic ending. This Philly band, feeling invigorated by the ocean view, familiar faces, and an air-conditioned room, had other plans. 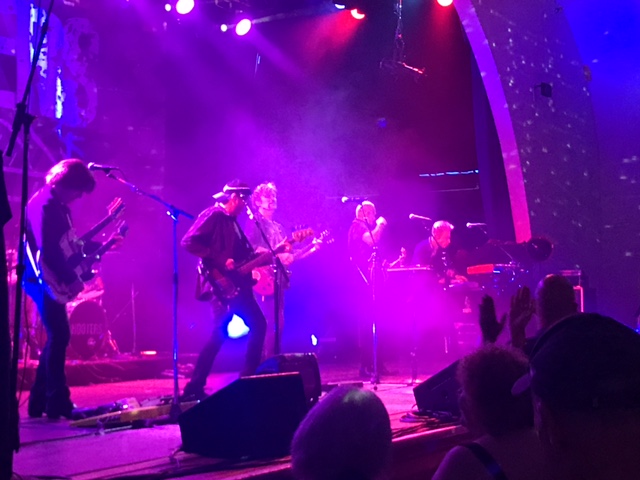 The “encore” was more like another full set. It began with a six-song “Unplugged” portion, according to Bazilian, “to give you guys a chance to catch your breath”. There was an impossibly speedy banjo-stomp on 1989’s “Zig Zag”. An acoustic version of “Nervous Night”. When somebody called out that it was bassist Franny Smith’s birthday, the band launched into an impromptu version of The Beatles’ “Birthday”. “We didn’t practice this one”, said Hyman, hedging his bets. It didn’t matter. They made it through unscathed, audibly assisted by the audience. 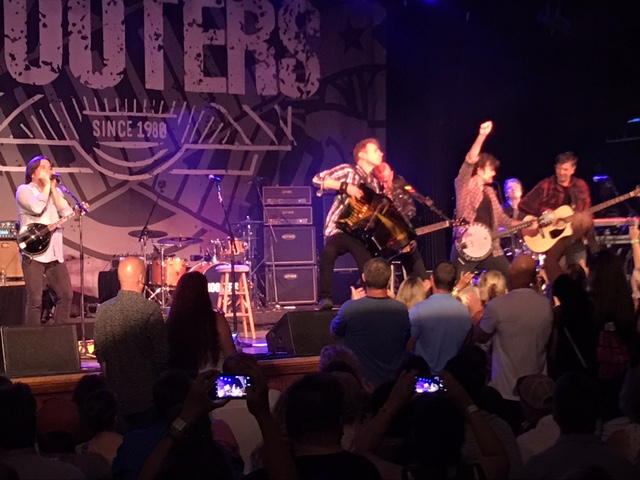 The mood was jovial. No one had headed for the exits. “We’re gonna play a couple from (2007’s) Time Stand Still”, said Hyman, “That’s the theme for this band, and what we’re probably all trying to do, or at least slow it down a bit.” True to form, the group played like old friends, who weren’t quite ready for the night to end. 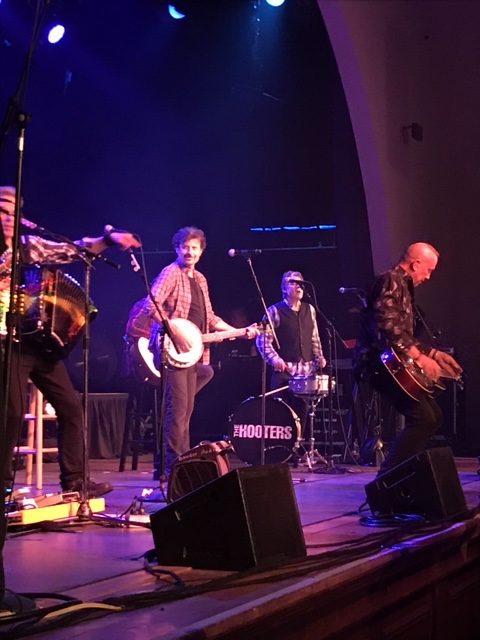 After completing the half-dozen song “Hooters Unplugged” set, they left the stage, but no houselights followed. The crowd was still standing and showing their appreciation. The Hooters soon returned, on their electric weapons of choice, for four more. 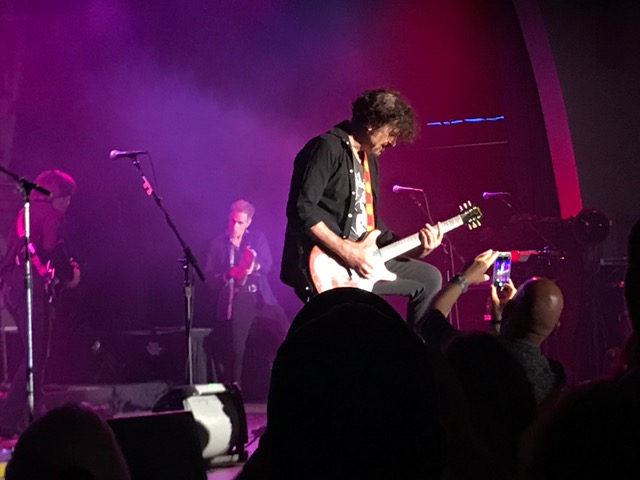 An extended guitar workout by Tommy Williams, led into the biting “Give The Music Back”, for which the tour and new live double-album are named. Then Bazilian dug deeply into “One of Us”, the Grammy winning 1995 Billboard Top 5 hit that he’d written and played with Joan Osborne. Turnabout being fair play, Hyman took the reins back on “Time After Time”, the 1984 chart-topping classic that he’d co-written and played with Cyndi Lauper. By now, we were nearing the three-hour mark of the show. “I know it’s Monday night”, Hyman began, “but it’s summer, you wanna hear a little more?”. The Music Pier crowd gave them an enthusiastic green light. And with that, the 1989 Hyman/Bazilian co-written “Beat Up Guitar” made for a fitting end to the night. 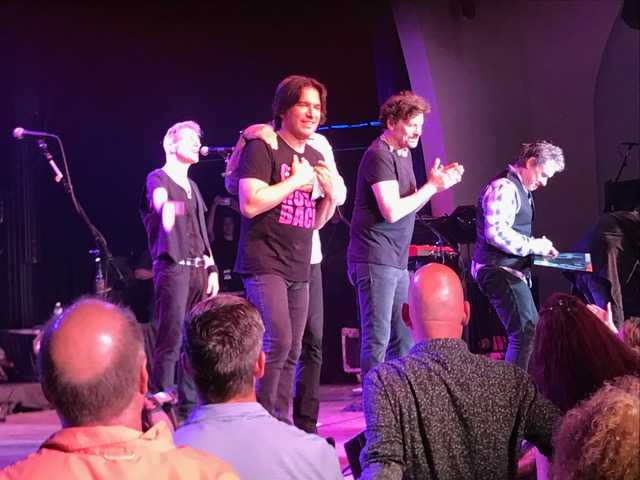 Shortly after 11, the houselights finally lit up the hall. The slightly dazed, satiated crowd, shuffled out the exits and onto the boardwalk. The grill was closed over at Ike’s Seafood. They were done dunking the deep fryer next door at Curly’s too. Nobody has figured out a way yet, to make time stand still. Not as of this night, despite large groups of dancing concert-goers, working up a late-night appetite. Despite that, it’s good to see a band, 37 years into their career, still doing their best to slow the process.