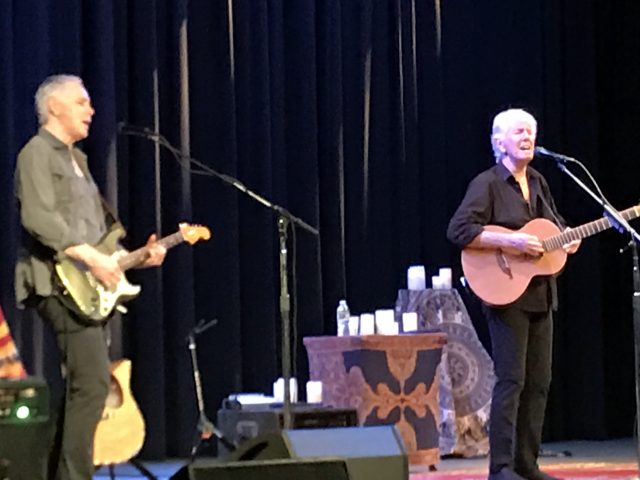 Graham Nash is rock and roll royalty. He’s one of only 21 musicians inducted into the Rock & Roll Hall of Fame twice. He was a fixture in the famed Laurel Canyon counterculture nexus of late sixties Los Angeles, plus a presence around the overlapping San Francisco scene. His “supergroup” Crosby, Stills & Nash, performed their first official gig at Woodstock. Nash was Joni Mitchell’s live-in lover during her Blue period. In 2010, the same year his original band The Hollies were inducted into the Rock Hall, he was appointed an Officer of the British Empire for his musical and charitable services.

You get the idea. The man has a density of life, and an impressive musical resume. Yet perhaps due to the company he’s kept, or the comparatively understated presence, he might not be one of the first names that comes to mind when discussing the genre’s living legends. That doesn’t mean that the 75-year-old Nash isn’t one. Nor does it mean it’s not a rare treat to have an artist of his caliber appear at the Ocean City Music Pier. He definitely is, while it truly was. 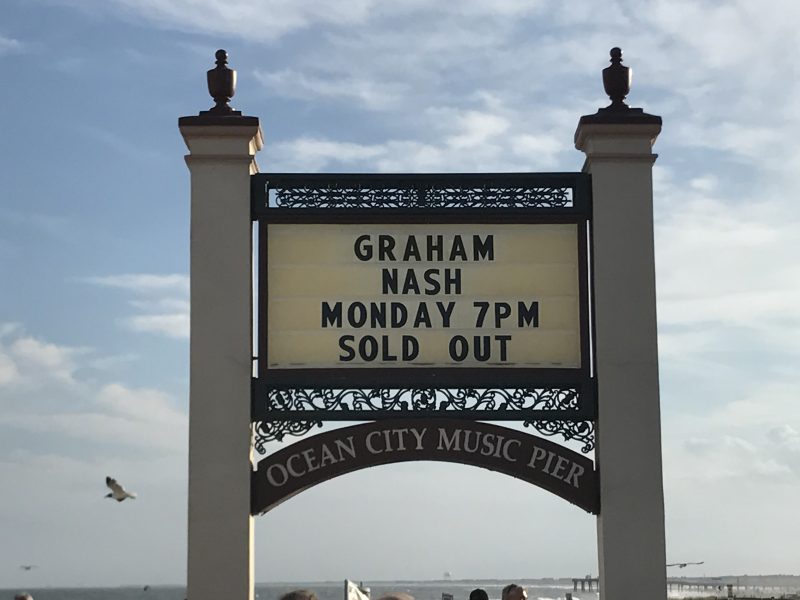 Best known for being one of three, sometimes four, “monkeys” (his words) in CSN-&-sometimes-Y, Nash is in a late-career renaissance. So longtime fans at the Music Pier were blessed with a stripped-down and intimate show on Monday evening. It was a night that allowed Nash to stretch out a bit. Over a two-hour show, you’d get all the major highlights of Nash-authored hits from his Hollies, CSN&Y and solo work. Perhaps more importantly, to the man and his lone accompaniment, guitarist/singer Shane Fontayne, you’d also get to hear him sink his teeth into some deeper cuts, Beatles covers and recent material.

The end result was a heady brew, which felt more personal for the artist and audience, than the typical summer-shed nostalgia trip. Stories shared, jokes told, tones politely hushed at appropriate times, singing duties shared during others. There was no light show, loud backing band, or any other trappings of a rock show. Nash strolled onto the stage unannounced, with the house lights still up, at just past seven. The crowd, almost surprised to see him, instantly rose to their feet. Nash thanked them warmly, then instructed them to sit back down. “Look, I know the world’s crazy right now, it’s crazy out there, but for at least these couple of hours while we’re here, let’s try to relax a little bit, alright?”. His admiring flock, now seated, seemed to wholeheartedly agree. With that, a loose evening with a tone of mutual respect was set. 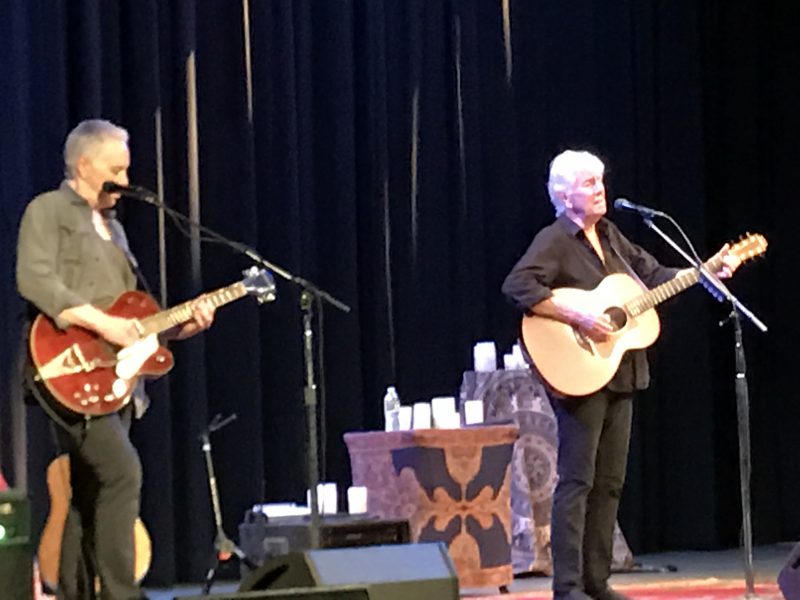 With his voice given space to roam, sans his famous musical co-conspirators, or a rhythm section, his own harmonies proved big enough to fill the room. Nash rotated between a bevy of acoustic guitars plus a Yamaha keyboard, occasionally utilizing a harmonica set when playing behind either one. “This is a great place you got here in Ocean City. Whatever you do, just please promise me you want turn it into another 7-11. Not that there’s anything wrong with 7-11, I’ve been in one on numerous occasions”. The Jersey shore crowd got his point, but also needed to offer an instructive correction. “Wawa”, came the shouts of many audibly helpful members in the crowd. “Okay, Wawa”, mumbled a smiling Nash, before shifting to more serious matters, namely “Simple Man” from his solo debut, which documented his breakup with Joni Mitchell. 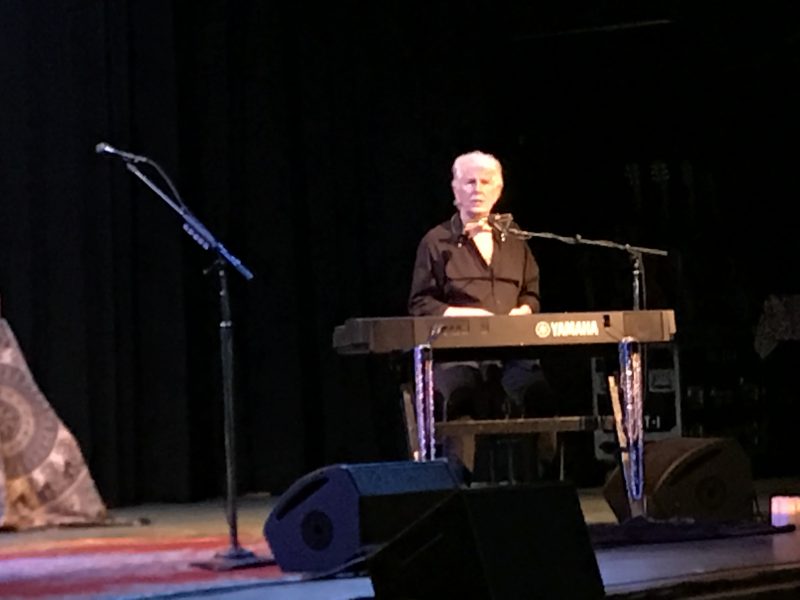 The audience weren’t the only ones offering Nash assistance. Nash’s friend Shane Fontayne displayed the musical chops that earned him spots on world tours with Sting, CS&N and Springsteen. The pair displayed an easy rapport, developed in an alliance that extends past hired-hand tour support. Fontayne produced and played on Nash’s 2016 This Path Tonight. Recorded in the wake of Nash’s divorce after 38 years, a prolific songwriting partnership formed that yielded twenty songs in eight days. In addition to providing leads and slide work, Fontayne also filled the vocal gaps capably. The shared result, when necessary, sometimes sounded like more than two people, while in other moments seemed like one. Perhaps the best examples of this dichotomy came on two Beatles covers. Fontayne’s Gibson guitar carried “A Day in The Life” to a crescendo. While “Blackbird”, with both sharing a mic, stayed true to that song’s skeletal structure. 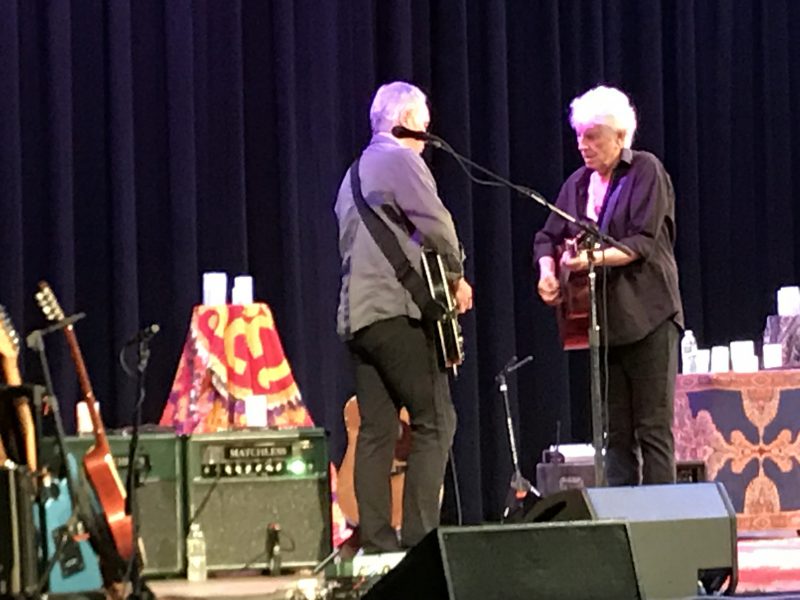 While between songs, weaving tales of harrowing boat trips with David Crosby, domestic bliss with Joni, border guard troubles and challenges from Maui marijuana dealers, Nash’s trademark tenor remained wholly intact. This was true whether he was “starting at the beginning” on The Hollies’ first American hit “Bus Stop”, riding along the “Marakesh Express”, or reflecting upon “Golden Days”. Before closing with a dedication to WMMR’s Pierre Robert, in the audience for the second week in a row, and “all the teachers of the world”, on his timeless singalong anthem “Teach Your Children”, Nash shared his appreciation with the sold-out room who’d come to see him. 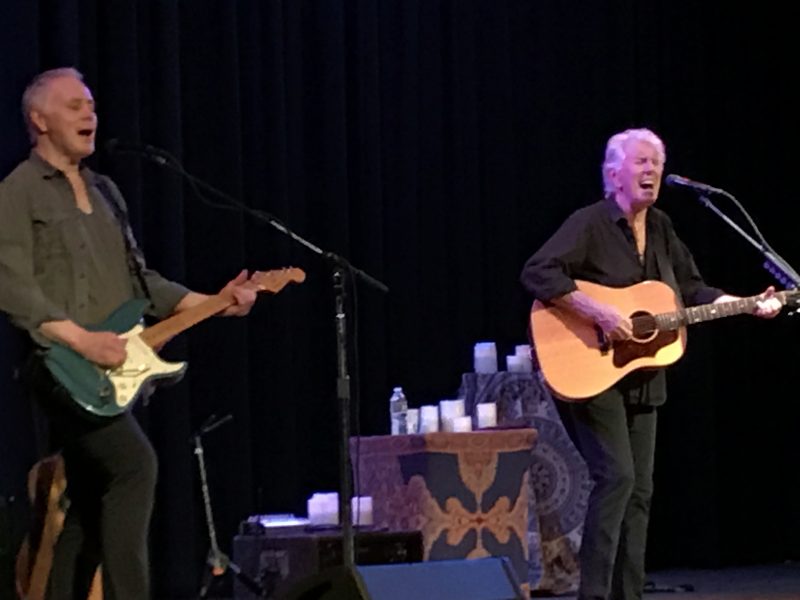 “Ocean City, New Jersey, it’s been an absolute pleasure to make music for you tonight. Thank you, I hope some of you had as great a night as I did.” Judging by the roar from the standing crowd, it appeared many did. Many lingered after the show, hoping for further interaction, or to peruse Nash’s photography on display outside. A stone’s throw away, a young man busked out on the boardwalk, singing CSN’s “Southern Cross” as indifferent pedestrians rushed past ducking low-flying seagulls. It sounded like it might be awhile before the young musician would raise enough donations to cover the $60 admission price for the Pier show, let alone become a pedigreed artist capable of charging that rate to a packed house. But as Graham Nash, and his shrinking group of true peers can attest, experience is the best teacher. 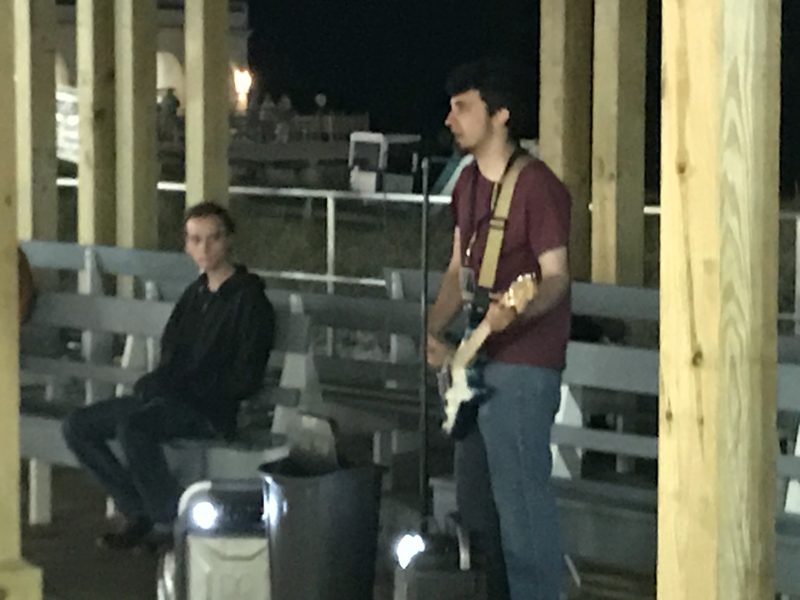 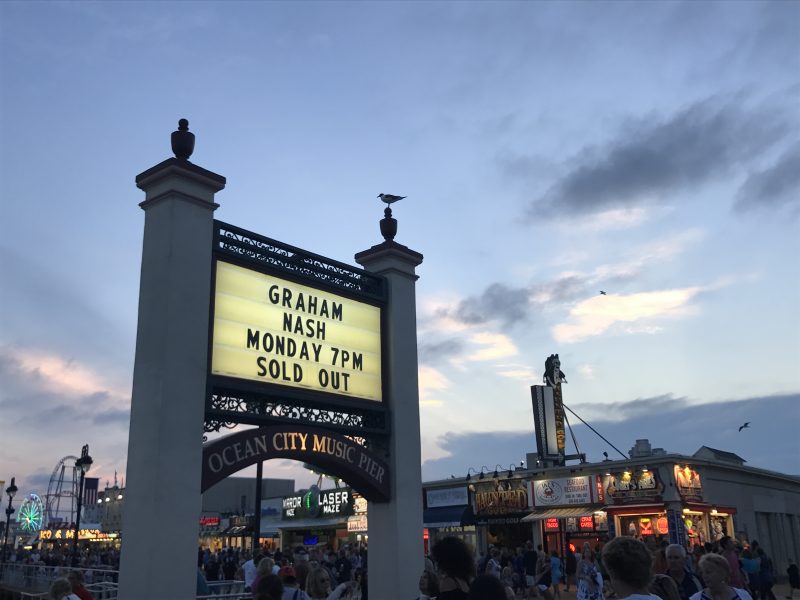 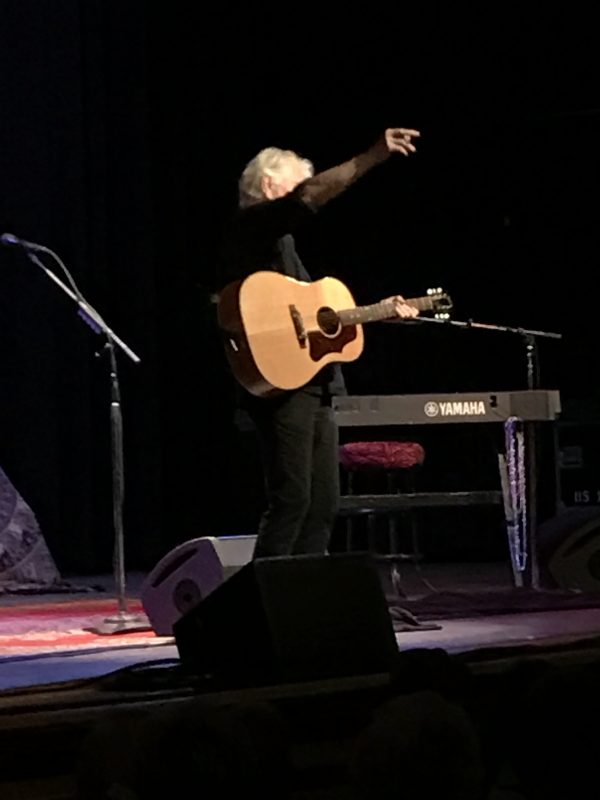