Jeff Reichle and his son, Wayne, didn’t hold up signs expressing their opposition to a proposed offshore wind farm during a peaceful protest Tuesday outside of the Cape May County Administration Building in Cape May Court House.

But the two men, from Lund Fisheries Inc. in Cape May, along with several of their fellow fishermen and women, are concerned.

They are concerned about their livelihood and what the gigantic wind turbines built in the ocean could mean to marine life and how they could safely navigate the structures and what the project would do to commercial and recreational fishing.

“Our issue is they haven’t reached out to the fishing industry,” said Jeff Reichle, chairman of Lund. “People think you can go fish somewhere else. But that is not the way it is. This is our business. We just don’t know how this will affect us. There are too many unanswered questions.”

Wayne Reichle added, “There is no proof that the wind farm will have a positive impact on fishing, only negative.”

The project, by the Danish energy company Orsted, is still in its permitting phase. If all is approved, there would be 98 towering turbines set a mile apart in the waters 15 miles off the coast of Atlantic and Cape May counties as early as 2024.

The Bureau of Ocean Energy Management (BOEM), a federal agency, is reviewing the environmental impact and operations plans for the project.

Another wind farm project is proposed by another company, Atlantic Shores Offshore Wind, and if approved, would be located about 10 miles off Barnegat Light in Ocean County.

The protest Tuesday was organized by Tricia Conte, who represents “Save our Shoreline NJ,” a group of nearly 4,000 concerned businesses, homeowners, residents, fishing community members, and New Jersey shore vacationers.

During the protest, Cape May County Commissioner Director Gerald Thornton came out to speak to the attendees.

He told them that he was opposed to the wind farm and that he, along with his fellow Commissioners who stood outside with him, would approve a resolution at Tuesday’s meeting opposing wind farms.

The resolution was unanimously approved.

In a statement prior to the protest, Thornton said, in part, “The primary purpose of my objection is concerns for our commercial fishing industry, which is the second most important economic engine for Cape May County.”

He continued, “I have not seen enough information to convince me that our sea life won’t be harmed by this development. Equally as important, I cannot support a project who is not listening to our people.”

Thornton also said, “The fishing community should be better represented in development of these plans to alleviate their concerns.”

He noted that U.S. Rep. Jeff Van Drew, whose congressional district includes Cape May County, is also opposed to the wind farms.

Ocean City Councilman Michael DeVlieger, an outspoken opponent of the wind farm, attended the protest in support of the Commissioners’ resolution.

“The state’s plan to install these massive wind turbines off our coast endangers our environment, our economy, and our way of life,” DeVlieger said. “I sincerely appreciate our Commissioners for standing up for our coastal communities.”

While most of the 30 or so people who gathered for the event were there to oppose the wind farm, there were a few people who were in favor of the project, which is touted to deliver clean, renewable energy.

“I am absolutely for the project. If we don’t do something to help the environment, we will be in trouble,” Jody Stewart, of Little Egg Harbor, said.

Stewart’s friend, Gretchen Landenburger, of Cape May, also is in favor of wind farms. “I support the wind farms to help the environment,” she said.

But lifelong Ocean City resident Martha Oldach said she is absolutely against the wind farm project.

“I’m horrified about the possibility of a wind farm project here,” Oldach said. “I absolutely don’t want it.”

Oldach held up a sign as she spoke with Cape May Commissioner E. Marie Hayes, who along with Vice Director Leonard Desiderio and Commissioner Will Morey, stood by as Thornton spoke to the crowd about his opposition to wind farms.

Conte, who represents Save our Shoreline NJ, remarked about the peaceful protest, calling it “definitely a success.”

She continued, “Seeing Facebook group followers coming together in opposition makes me feel thankful that people are not only opposed to offshore wind, but are willing to take their time to come to Cape May Court House to show their support. The energy from the group in attendance was invigorating.” 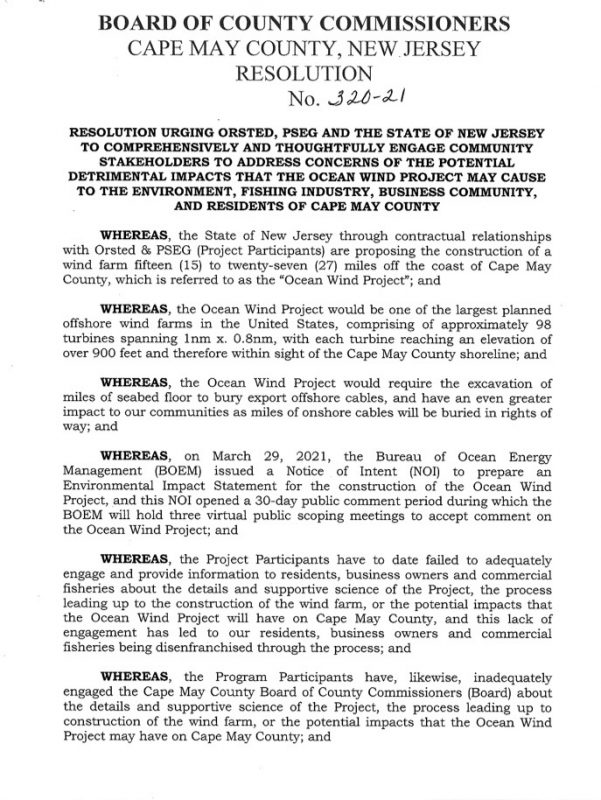 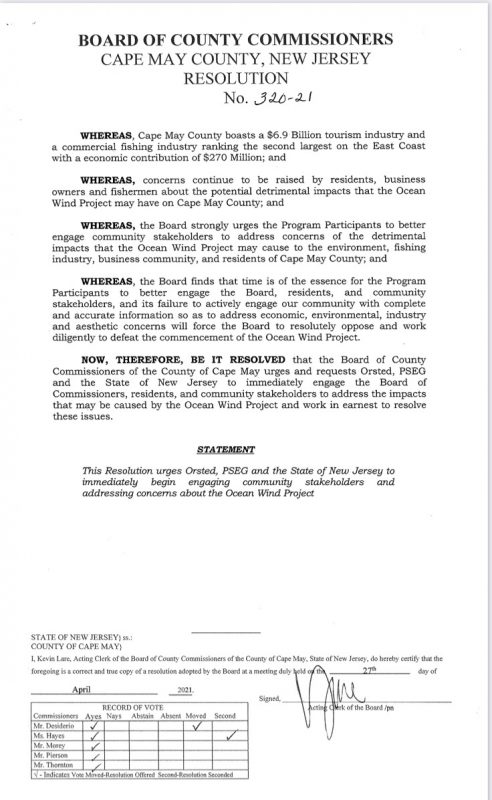