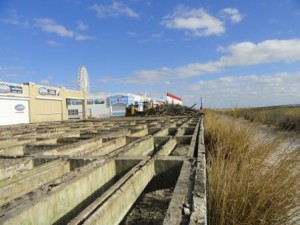 Boardwalk reconstruction will continue to 12th Street over the next three years.

Call it the Big Fix.

Roadways, the boardwalk, the lagoons and other parts of Ocean City are in line for major upgrades over the next five years under a nearly $100 million capital plan unveiled Tuesday night by Mayor Jay Gillian.

The spending plan for 2016 to 2020 represents about a $19 million increase over the previous five-year capital program and will help the city catch up on long-neglected projects, Gillian and his top aides said.

Gillian stressed that the plan is a broad blueprint for addressing the city’s critical infrastructure needs and will likely undergo revisions based on input from City Council and the taxpayers.

“That’s why we keep saying it’s a plan. Nothing’s etched in concrete,” the mayor said, while presenting his proposal to Council members during a three-hour workshop at the Ocean City Free Public Library.

Council will now have a chance to scrutinize the plan before deciding whether to endorse it. A vote could come in February.

“This is a lot of money, and we’re not going to spend it if the public doesn’t think it’s a good idea,” Council President Keith Hartzell said.

The city would be able to capitalize on its good bond rating, low interest rates and rising tax ratables to pursue what would be the most ambitious capital program in years, members of Gillian’s administration explained.

“We feel we’re in a unique position to tackle this over the next five years,” said Frank Donato, the city’s finance director.

Donato estimated the plan would add 4 cents to the tax rate on the city’s debt service by the end of the five years. For the owner of a home assessed at $500,000, that would mean an additional $200 in taxes to cover debt service by 2020.

In total, the capital plan proposes $98.5 million in spending over five years. Funding would come from a combination of federal, state and local money.

Craig Stuart, a resident of the 2900 block of Simpson Avenue, characterized the plan as “overly ambitious.” Simpson, one of the members of the public who spoke during Tuesday’s workshop, urged city officials to concentrate on sewer, drainage and road projects to improve public safety.

A series of big-ticket projects highlight the capital plan, including improvements to flood-prone streets, the boardwalk’s commercial zone, beaches in both the north and south ends of town and the notoriously clogged lagoons along the back bays.

The plan also includes the replacement of the city’s antiquated Public Safety Building, the home of the police department. This year, $1 million would be set aside for designs and engineering costs for a new public safety building. In 2017, an estimated $9 million would be spent to construct the new building on land across the street that now serves as a parking lot behind City Hall.

Members of the public expressed concerns that the project would mean the loss of vital parking spaces for the downtown business district. However, Gillian said even more spaces could be created when the existing Public Safety Building is demolished and the land is coverted into parking. The new building would be elevated and include public parking underneath.

Roadway upgrades would be another major focus of the capital plan. More than $34 million would be spent over five years on road construction and related drainage projects, particularly in flood-prone areas that leave streets underwater.

About $17 million in roadway and drainage projects are proposed in 2016. They include a pumping station in the north end and related road improvements between First and Eighth streets. Portions of Bay, Haven, Simpson and West avenues are part of the north end road project, estimated at $8.4 million.

Some of the streets and alleys in the city’s mid-section would also undergo paving and drainage improvements this year as part of a $1.6 million reconstruction project. They would include parts of Simpson, West, Asbury, Central and Wesley avenues between 24th and 28th streets.

In addition, $4 million would be spent for paving, drainage work and pumping stations from 26th Street to 34th Street between Bay and West avenues. That work would represent the first phase of a major project to remediate flooding in that part of the island.

The boardwalk is another centerpiece of the capital plan. Nearly $6.5 million would be spent over the next three years for a Boardwalk replacement project from Seventh Street to 12th Street. The work would complete the boardwalk’s overall refurbishment between Fifth Street and 12th Street.

Beach replenishment will continue in both the north and south ends of town in the capital plan. Ocean City will pay a small portion of Army Corps of Engineers renourishment projects tentatively scheduled for 2018.

Gillian has also made dredging a major priority of the plan. He is proposing to spend a total of $20 million over the next three years to remove mud and silt from the clogged lagoons lining the back bays.

The mayor argued that the lagoons have been neglected for far too long. He estimated that 1 million cubic yards of muck must be dredged from the shallow waterways to make them passable for boat traffic and safe for swimmers.

“This is a serious, serious issue in the back bays,” he said.

Gillian voiced reservations about the enormous cost of the dredging and indicated he might be open to “throttling it back” if that’s what taxpayers want.

Gillian and his aides, though, did not outline the dredging plans Tuesday.They said a city consultant, ACT Engineering, will give details about the dredging projects during a town hall meeting scheduled for 7 p.m. Monday at the Ocean City Free Public Library.

A complete list of the proposed projects in the capital plan can be found on the city’s website at ocnj.us/capital-projects.