Marie Sacks-Wilner has no Irish blood. But that didn’t stop the Somers Point resident from playing Irish music on her flute Saturday on the Ocean City Boardwalk.

“I feel a kinship with the Irish and Irish culture,” Sacks-Williams said after performing a traditional Irish jig, “McNamara’s Band” and some other classics. In addition to the Irish tunes, she was playing more modern songs by Irish artists such as Van Morrison and U-2.

“My mother’s favorite was ‘Danny Boy,’ that’s why I play that one, for her,” Sacks-Wilner noted. “My father was German, but he looked Irish. I’m (mostly) Italian. I still love St. Patrick’s Day, and love playing here in Ocean City. It’s my happy place.”

Marie’s sentiments prevailed Saturday as Ocean City residents and visitors enjoyed breezy, sun-splashed weather, and many kicked off their St. Patrick’s Day celebrations a day early. Or, in the case of Jamie Ford, two days early.

“I’m a teacher, and you should have seen the outfit I wore to school yesterday,” said Ford, clad in shamrock-emblazoned yoga pants at the Wawa on West Avenue.

The Ocean City resident, a third grade teacher at Washington Avenue School in Pleasantville, said she was green from head to toe for her students on Friday.

Tom and Lil Walsh, of Bucks County, Pa. said they drove to their second home in Ocean City especially for the St. Patrick’s Day weekend.

“I’m more Irish than he is,” said Lil, whose maiden name is McNaulty.

Despite their non-Irish surnames, Rose Giroso, of Wilmington, Del., and Gerald Kauffman, of Newark, Del., both claim Irish heritage.

Giroso is an interior designer whose mother Anna Nannery is a native of the Emerald Isle. Kauffman, a Public Policy faculty member at the University of Delaware, also touted his Irish background.

The pair chose their wardrobes for the occasion. Giroso sported a green jacket and Kauffman donned a jaunty green fedora.

“It’s a great weekend to celebrate. It’s so Irish. Everything is Irish this weekend,” Giroso said.

Three couples from Pennsylvania, Meg and Frank Wiseley of Macungie, Suzie and Bill Gennaro of Havertown, and Beth and Joe Rafferty of West Chester, were in a great mood as they returned to their Gardens Plaza condo following a group dinner at Josie Kelly’s Public House in Somers Point.

The men wore festive Irish hats and the women donned green wigs. Well, we thought they were wigs.

“This took a long time to grow in,” Suzie Gennaro protested.

Pat Callahan, who said he is “100 percent Irish,” was enjoying the beautiful weather with his son Matt and other family members.

“It’s a great day, especially for the Irish,” Callahan said.

Earlier, on the Boardwalk, Megan Gray, of the Gardens section, was walking with her daughter Margaux, an Ocean City High School student who sported green beads and shamrocks.

“I’m proud of my heritage and I like to show it off,” said Margaux. 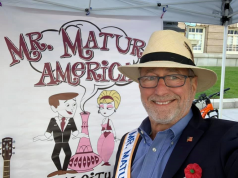 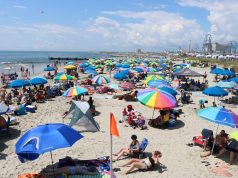 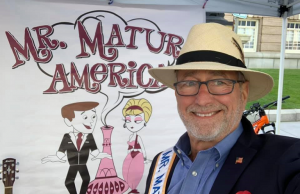 tkelly - February 28, 2020
0
Being the type of guy who “never takes myself too seriously,” Jack Merritt answered a question about his year of holding the title of Mr. Mature America with a quip. “It’s been the most fun I’ve ever had with my clothes on,” Merrritt said. The reigning winner of the zany pageant-style competition for men 55 and older says his successor is in for a similar thrill-packed ride. “People stop me at events and chat, I get to come to Ocean City more often than I normally would, and I’ve made many new friends. It’s been great,” he said. For Merritt, a consultant and private pilot from West Grove, Pa., who owns a summer home in Ocean City, the ride will end on Saturday, April 18, at the conclusion of the 7 p.m. event at the Music Pier.