Patrick and Cathie Knaus, of Ocean City, couldn’t wait to bring their grandchildren, Brendan, 4, and his 2-year-old brother, Jack, who were visiting from Swarthmore, Pa., to the Gardens Civic Association Bike Parade Sunday morning.

“We are thrilled. Last year, with the bike parade and so many other things being canceled, the summer just didn’t have that great Ocean City feel. So this year, we decided to go all out,” Cathie Knaus said.

And they did. The kids were decked out head-to-toe, along with their bicycles, in patriotic colors, streamers and glitter.

“I’m so glad to see everybody out and about,” Patrick Knaus noted.

Whether swimming, lounging on the beach, riding a bike in a parade or strolling along the Boardwalk, visitors and residents alike enjoyed the holiday weekend.

Hilary Shawn, of New York City, and her 4-year-old daughter, Mila Sky, enjoyed a walk along the Eighth Street beach before going back to their towels and Mila’s sandcastles.

“We have been here for almost a week,” said Shawn, who used to live in Philadelphia. “I’ve been coming to Ocean City for as long as I can remember. We come as much as we can.”

Some sunbathers relaxed in beach chairs by the water’s edge to take in the cool breezes, while others took cover under pop-up tents and cabanas. Kids played games, and families splashed in the surf.

Up on the Boardwalk, bicyclists whizzed by while other visitors perused shops, grabbed a bite to eat or strolled the boards while sipping cool drinks.

Staci Lombardo and her friend, Elena Paraskevas-Thadani and her 13-year-old son, Vishal Thadani, all of Chappaqua, N.Y., decided to grab iced teas and do some sightseeing. They are on their annual Ocean City two-week vacation.

“It’s so nice to be able to get out and be with friends and celebrate our nation’s birthday,” Lombardi said.

“We didn’t come down last year because of the pandemic. We are so happy to be back in Ocean City,” she added.

Vishal chimed in, “We have been coming here since I was three. I think my favorite thing in Ocean City is the beach. Every morning we get up and get doughnuts, too.”

The north end bike parade, which began in the 1950s, makes its way through the Gardens each year. The celebration is organized by longtime Ocean City resident Duane Sonneborn.

It is a longtime tradition in the Zamrowski family to never miss the north end bike parade, they said.

“We’ve done the parade since I was born,” Kathleen said as they lined up to roll down the road and showcase their patriotic colors. “My favorite part about the parade is the tradition. I like how everyone does it and decorates their bikes.”

Brian Zamrowski called it a fantastic event in a community he loves.

“The parade brings families and country together like no other event,” he said.

Michele Gillian, executive director of the Ocean City Regional Chamber of Commerce, along with her husband, Mayor Jay Gillian, watched the parade, along with many other spectators, all enjoying the joyous atmosphere.

“The Gardens Civic Association does a fabulous job with the parade,” Michele Gillian said. “This is one of the biggest ever. It is a great event for the community.”

The mayor added, “This is what Ocean City is all about, family and tradition. Everybody gets together and has a good time.”

“I love seeing everybody enjoying themselves,” Lynne Cates said, noting that last year, amid the COVID-19 pandemic, things were much different. “Everything is getting back to normal.” 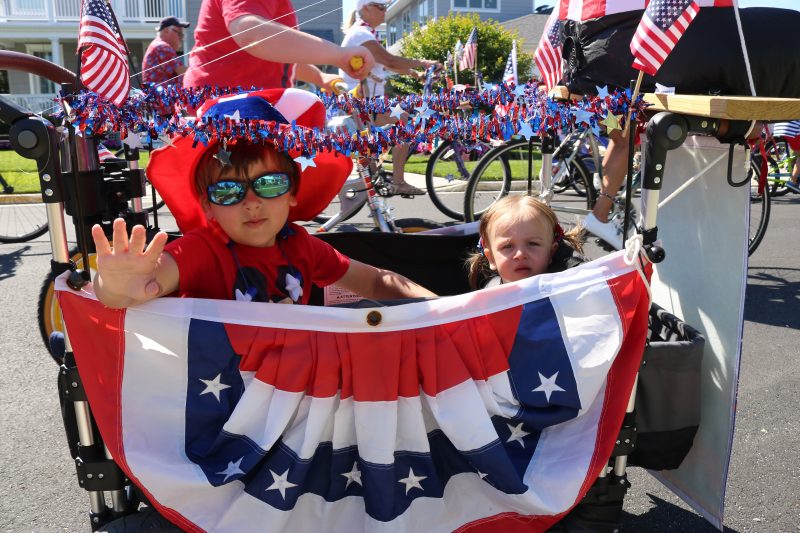 George Dixon, 4, and his sister, Victoria, 1, of Massachusetts, hop a ride in a wagon.