Stephanie Gaitley, head coach of the Ocean City High School girls basketball team, and her players will showcase their talents for a worthy cause on Sunday when they dribble across town, stop at each of the city’s outdoor courts and do a layup to benefit cancer survivors and their families.

Ocean City police will provide an escort as the participants dribble down the streets to the courts in a stretch of five miles to benefit the Kay Yow Cancer Fund in honor of the late, legendary girls college basketball coach who died in 2009 of cancer.

Yow coached the gold medal-winning U.S. women’s basketball team in the 1988 Olympics after being diagnosed with breast cancer in 1987.

“Kay Yow was a trailblazer for our sport. The team and I want to honor her,” Gaitley said in an interview Monday. “I got to know her and admired her as someone who was influential in the sport, not just as a coach, but as a person as well. She had great character and was a caring person. You could tell her players loved her and she was an influential person to me.”

The event, being called “The World’s Longest Layup Line,” which Gaitley noted was more of an attention-grabber than a confirmed fact, is hoping to raise more than $5,000 in honor of Yow.

Anyone who donates $50 will receive an official Red Raiders T-shirt. In addition, the participants will have the names of the people they are fundraising for printed on their basketballs, Gaitley said.

Twenty-five Raiders players will participate in the event. In addition to Gaitley, assistant coaches who will also be involved in the fundraiser are Emily Gillian, and Gaitley’s nephew, Jack Davis, an Ocean City police officer, and Gaitley’s sister, Coco Lefkowitz.

The event will be rain or shine. A group photo at the basketball court at 52nd Street will take place around 9:45 a.m. Sunday.

Then the participants will dribble down to the basketball courts at 34th Street, 18th Street, 15th Street, Eighth Street, First Street and circle back to the Sixth Street courts, where the fundraiser will end around noon with a pizza party at Sixth Street Pizza.

Like Yow, Gaitley has also been somewhat of a legend in women’s basketball, starting with her high school playing days in Ocean City. She had a storied career playing college ball to advance to the NCAA Final Four in 1982. She then went on to teach other players skills on the court to win championships at top colleges. Before returning to her hometown to coach, she was a coach for 11 seasons for Fordham University’s women’s basketball team.

She said she wants to instill in her players the importance of positive involvement on and off the court, specifically to help others.

Gaitley hopes that the event is a big success.

“I think watching the way the world is going, so much ugliness. I just want to try to bring goodness,” she said. “One of the things I like to tell my players is to win the day as a person, player and student and just try to be the best at what you do every day.”

To learn more about the fundraising event and how to donate, consult the flyer that follows: 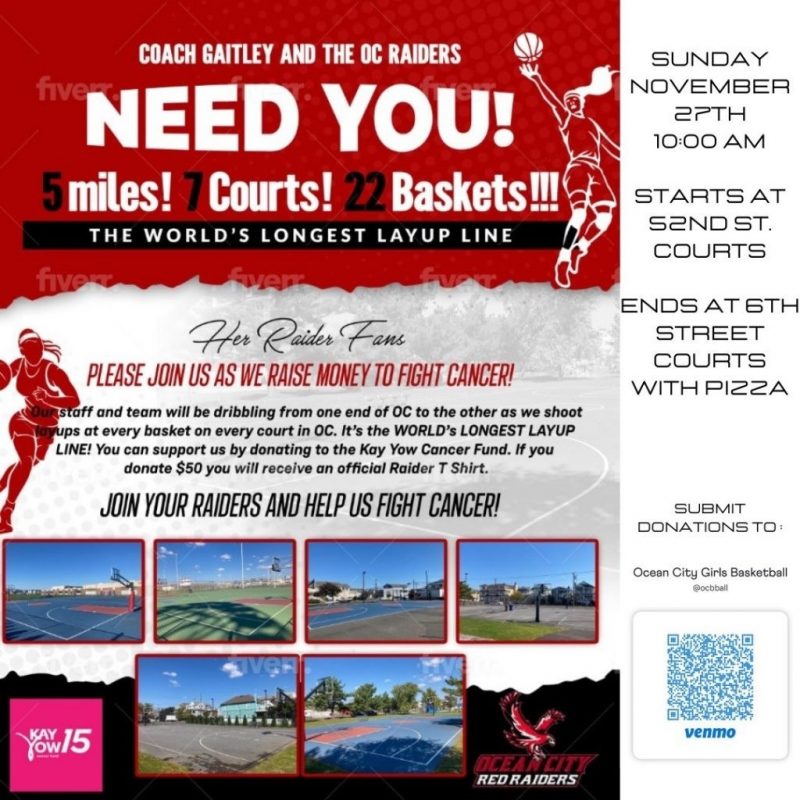