Judging by previous visits to Ocean City, we can expect some big things this year from the Northwestern University mens’ soccer team.

Wildcats Head Coach Tim Lenahan, an OC homeowner since 1986, recently brought his team to town for pre-season training for the sixth time in the last 10 years. During that span Northwestern won more soccer games (121) than any other team in the Big 10 and racked up numerous other accolades.

The first time Lenahan and the Cats came to town, 2006, “we had one of our best years, finishing in (the NCAA Tournament) Elite Eight,” Lenahan said during his most recent visit, which concluded on Sunday.

“Two years later we came back and we went to the Elite Eight again (winning a school-record 15 games in the process). Then, in 2012 we made the Sweet 16, and won the Big 10 championship.”  Lenahan was also named Big 10 Coach of the Year that year.

A South Jersey native and graduate of Overbrook Regional High School in Pine Hill and a former Stockton College (now University) player and head coach, Lenahan is starting his 16th season at the ‘Cats’ helm. Before that he coached three seasons at Lafayette College in Easton, Pa. At each stop Lenahan inherited previously moribund programs and turned them into national powers.

Nowhere was his turnaround artistry more evident than at Northwestern, located in Evanston, Illinois, just outside Chicago. He took over a program that was winless the year before and in 2001 changed the culture to that of a winner. He recruited players who excelled academically as well as on the pitch. Many former players went on to professional careers and Lenahan formed a “coaching tree” that spawned a dozen college and pro head coaches.

He did so with a level of intensity rare even among his peers in today’s high-stakes world of college athletics.

“In our sport, the world knows, and the United States is now learning, you have to fight for everything,” he said. 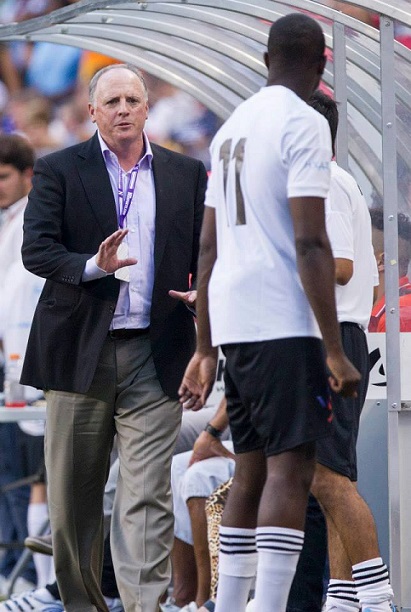 Lenahan returns to Ocean City and his house on 13th St. each summer and parts of most off-seasons to decompress after completing the rigorous Big 10 schedule, and usually, the NCAA tournament. “It takes me about a month” to wind down and begin gearing up for the next season, he said.

When he began thinking of setting up an every-other-year training sojourn in 2005, there was little doubt the location would be in his second home. Not only could Lenahan return to the familiar sights, sounds and rhythms of OC, his players, many of whom are from the nation’s heartland, could learn firsthand about the attraction of the Jersey Shore. The results speak for themselves, and this year has been no exception. “It has been a great trip, the only (negative) thing has been the weather. There was such heat for a few days that we had to back off some on the training,” Lenahan said.

While they were in town, Lenahan’s charges could be seen scrimmaging on the beach and on city soccer fields, running on the boardwalk, and at night “Doing what you do in Ocean City: walk the boards, play mini golf, and eat ice cream.”

In giving back to the community, and winning new fans in the process, the team distributed free T-shirts to lucky people on the boardwalk during a recent Family Night.

Northwestern opens its regular season at home on Friday, August 26 against Florida Gulf Coast. They are coming off a 7-9-2 record, during which they played without a home field due to a $260 million renovation of their stadium and other sports facilities at Northwestern.

Their week-long trip also included training and three exhibition matches at Stockton.  They drubbed South Jersey Select, 8-0 on August 13, then trimmed Patriot League power Colgate 2-1 on Tuesday, and played St. John’s University of the Big East to a 1-1 draw on Friday.

Colgate is coached by former Lenahan assistant Erik Ronning, who followed his mentor’s lead and organized an Ocean City camp for his own team. Lenahan’s “Camp OC” must be doing something right.

His players stayed in rented condo units in the same 13th St. neighborhood where the coach’s home is located and got in some team bonding. “During the season, some of the players are in different dorms and others live off-campus.  This is an opportunity to be together as a group.”

Another highlight, Lenahan said, was learning firsthand about a South Jersey-Philly area staple.

“At the risk of giving free advertising, our guys were right there to experience what Wawa is all about,” he laughed.

With all of his coaching success, Lenahan sees no reason to slow down. He said he plans on keeping at it for another decade.

“But when I do stop, there is no doubt where I will be (making a home in retirement),” he said. “Right here in Ocean City.”