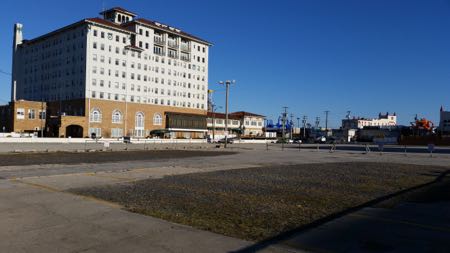 Site of the proposed six-story 111-unit Soleil hotel-condo complex is at 11th Street and Ocean Avenue in Ocean City — currently a parking lot adjacent to the Flanders Hotel.

Plans for a new condo-hotel next to the Flanders Hotel drew intense objections from the public during a nearly five-hour Ocean City Planning Board hearing that ended late Wednesday night without a vote on the project.

An overflow crowd packed the Council Chambers inside City Hall for the hearing on the proposed six-story Soleil Resort.

Weary board members adjourned at 11:10 p.m. after more than 20 members of the public spoke, virtually all of them in opposition to the project. The board will continue the hearing at its Feb. 3 meeting and possibly take a vote on the developer’s application for site plan approval.

Critics claim the 111-unit condo-hotel will rob the city of an important parking lot that serves the Ocean City Boardwalk and may jeopardize the resort town’s family-friendly atmosphere.

“I believe this is the wrong kind of development,” Martin Keane, a condo owner at the Flanders, said of the Soleil.

Most of the speakers who denounced the project during the hearing are condo owners at the Flanders.

Soleil’s proposed development site at the corner of Ocean Avenue and 11th Street is currently a parking lot adjacent to the Flanders.

Soleil is regarded as a potential formidable competitor for the oceanfront Flanders, which operates as a condo-hotel and is one of the city’s iconic businesses.

Patty Burgess-Brecht, a Flanders condo owner, voiced concern that the Soleil could threaten the Flanders’ recent recovery from a series of financial troubles that have marred its history.

“I feel that the Flanders, as the historic jewel of the island, would not be able to withstand another blow,” Burgess-Brecht said.

City officials believe that the Flanders and the Soleil would complement each other to attract more corporate business and special events to town, including large-scale weddings.

“We’re hopeful that the blending of the two properties will make the Flanders even more successful,” Planning Board member Gary Jessel said.

The developer of the Soleil project, Select Properties Inc., of Colmar, Pa., argued that the condo-hotel will boost the local economy by drawing more tourists and overnight guests.

Clayton Heckler, president of Select Properties, said the project fits in with the city’s strategy for new hotels in the redevelopment zone surrounding the Flanders.

Heckler and his team of professional consultants spent the first three hours of Wednesday’s hearing outlining details of the project and touting what they said would be the benefits to the community.

Select Properties tweaked the project — changing it to a condo-hotel complex — after the board last year rejected the original plans for a straight condominium. The board made it known that it wants a new resort-style hotel as a centerpiece of the redevelopment zone.

Heckler stressed that he heard the board “loud and clear” in its demand for hotel construction. Under his plan, Soleil’s condo owners would make their units available to overnight guests to satisfy the city’s requirement for the property to operate as a hotel at “all times.”

Soleil’s owners would not be allowed to stay in their units for more than 120 days per year, freeing up the rooms for hotel guests most of the time, Heckler explained.

“The only way they make money is by renting them out,” Heckler said of the financial incentives for condo owners.

The 120-day annual stay limit for condo owners is divided into four different seasons. That means the owners would be limited to 30 days in each season, preventing them from using their units during the entire peak summer tourist cycle.

However, Jessel and members of the public seemed skeptical whether the Soleil would truly operate as a hotel.

Jessel said that other planning boards under previous city administrations approved an estimated 10 to 15 so-called condo-hotel projects, only to never see them operate as hotels. He noted that they classified themselves as condo-hotels to win city approvals and “beat the system.”

After examining the Soleil’s proposed designs, opponents have concluded that the project would lack the storage facilities and other amenities needed for it to truly operate as a hotel.

“This is not a building that’s going to function as a hotel. It’s perfectly obvious that it’s not,” said Hank Glaser, who made his living on the boardwalk at Shriver’s Salt Water Taffy and Fudge.

Marie Hayes, a resident of Battersea Road who said she loves the Flanders, asserted that the Soleil is nothing more than a condo complex poorly disguised as a hotel.

“What we have before us is a condo project, not a luxury hotel,” Hayes said.

Another critic, Sharon Capizzi-Walsh, owner of the Pavilion Motor Lodge, said the Soleil simply “does not scream hotel.”

Heckler assured the planning board that Soleil would operate as a hotel under professional management. Maid service, valet parking and other hotel-style amenities would be offered.

The project will come under further scrutiny when the board continues the hearing on Feb. 3. Christopher Baylinson, an attorney representing the Flanders, plans to call expert witnesses to point out alleged deficiencies in Select’s plan.

Baylinson’s attempts to press Heckler for more information during a series of questions at Wednesday’s hearing prompted objections from Select’s attorney, Nicholas Talvacchia. At one point, Talvacchia angrily accused Baylinson of “playing games.”

Meanwhile, Soleil’s proposed hybrid condo-hotel ownership structure is crucial for securing financing for the project. Select’s representatives told city officials last year that a standalone hotel at this location would not be a success, making financing difficult, if not impossible.

Select has not yet publicly divulged the project’s cost. Construction on the multifaceted complex would be done in three phases. The first phase would focus on the condo tower overlooking Ocean Avenue. A three-level parking garage would come next, followed by the second condo tower along 11th Street.

Keane, one of the first speakers to criticize the project, fears that it represents a new generation of large, commercial developments that could harm Ocean City’s small-town feel and its reputation as a tourist haven.

Much of the public’s concerns focused on whether Soleil would cause parking problems and add more congestion to streets already clogged with summer tourist traffic.

The project would replace the public parking lot at the corner of Ocean Avenue and 11th Street. Soleil’s complex would include a public parking garage providing nearly 400 spaces.

Heckler and his consultants said the garage would have more than enough capacity to meet demand. Soleil would also reserve 152 parking spaces for the Flanders as part of a 1995 deed restriction on the property.

Soleil’s opponents warned of possible parking shortages. They said the loss of the public parking lot would deprive the city of a key spot that serves visitors and Boardwalk businesses.

“That parking lot is iconic for Ocean City,” said Alex Kazmarck, owner of the Surf Mall retail center on the Boardwalk.

Read more: Owners Return for 2nd Try at Six-Story Development Next to Flanders

Get the Daily: Sign up for free updates on Ocean City News