Dorenbos, a 14-year NFL veteran and former Eagles long-snapper, held a sold-out Music Pier crowd enthralled as he performed a magic show and mixed in inspirational and motivational messages.

“Jon Dorenbos: an Evening of Magic, Comedy and Football” proved to be a big hit. It was his second visit to OC after his first sellout performance on the Music Pier last year. He is also scheduled to return for a third show in July, for which only a limited number of tickets remain available.

Dorenbos retired from football prior to the 2017 season when a routine physical exam revealed an aortic aneurysm and immediate open-heart surgery was required.

He had recently been traded from the Eagles to the New Orleans Saints when the condition was discovered. But the Eagles still awarded him a Super Bowl ring for his dedication to the team and the city.

His show on Saturday lasted about an hour and forty-five minutes and included some eye-popping magic with his message themes of “Teamwork, Forgiveness and Accountability.”

Dorenbos freely discusses his own story of redemption in the wake of an unspeakable childhood tragedy. As a 12-year-old, the future NFL star endured the trauma of his mother’s murder at the hand of his father. Rather than letting the situation get the better of him, Dorenbos turned to magic and embraced the tragedy as something that could make him a stronger person.

His message is to rise through adversity, be courageous enough to set high goals, and then to create and execute a plan to achieve those goals.

This approach enabled Dorenbos to endure a dark period in his life, achieve at a high level and to use it to inspire others.

He utilized his story during an amazing run as a contestant on the hit reality TV show “America’s Got Talent,” during which Dorenbos survived numerous elimination challenges and finished third overall. 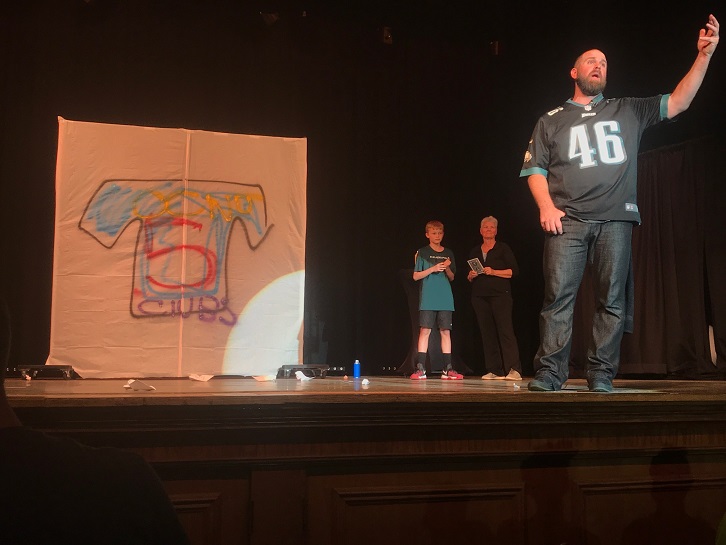 The charisma and “master magician” talent that has served Dorenbos so well throughout his life was on full display at the Music Pier, much to the delight of his rapt audience.

Earlier in the day he made his return to town official with an appearance on the 9th St. Beach to participate in Martin Z. Mollusk Day. It took no Dorenbos magic for the Ocean City hermit crab mascot to see his shadow and predict an early summer in America’s Favorite Family Resort.