FAQs on Water and Sewer Bills in Ocean City

I have a problem with my water or sewer bill, whom should I call?

I called New Jersey American Water Company about my water and sewer bill, and they told me to call the city. Why?

We have worked diligently with the management of the New Jersey American Water Company on this issue, and they have informed us that they have instructed their Customer Service Center representatives to answer questions from Ocean City customers and not to refer them back to the city itself. If a customer service representative mistakenly tells you to call the city about your concern, please ask them if you may speak with a supervisor. Unfortunately, this system is not always sure-fire and there are occasional glitches that occur with misinformed service representatives at the water company directing your inquiries in the wrong direction back to the city.

How is my water rate determined?

The cost of delivering high-quality, reliable water depends on a number of key factors, including the following:

Note: The rates charged by the New Jersey American Water Company are annually reviewed and approved by the New Jersey Board of Public Utilities (NJBPU). Traditionally, public hearings are held in Ocean City after petitions have been filed with the NJBPU for any rate increases or decreases. At that time the public & City representatives are afforded an opportunity to speak on the proposed changes in rates. Additional information can be found on the New Jersey Board of Public Utilities website @ http://www.state.nj.us/bpu/

What are the main components of my water bill?

New Jersey American Water Company owns and maintains the waste collection system, pumping stations and pipelines that are utilized to collect sewage from homes and businesses in the city. The sewage is transferred to the Cape May County Municipal Utilities Authority (CMCMUA) sewage treatment plant located at 45th Street & West Avenue in Ocean City. The CMCMUA owns and maintains the treatment plant, pumps and pipes necessary to treat and dispose of the collected and treated sewage. Approximately 68 percent of your sewer payment covers the costs New Jersey American Water Company pays to the CMCMUA to treat and dispose of the sewage generated within Ocean City. Each municipality using the CMCMUA plant is required to pay for the volume they send to be processed. The remaining 32% percent covers New Jersey American Water’s expenses to collect sewage; maintenance of the collection system; pay local, state and federal taxes and to invest in the aging infrastructure of the waste collection system.

What are the current sewer rates for wastewater in Ocean City?

What is the purpose of the PSTAC?

The PSTAC reflects the costs that New Jersey American Water Company pays to the CMCMUA for the treatment and disposal of the wastewater. Each year the PSTAC is reset and may increase or decrease depending on many different factors, including the amount of wastewater sent to the sewage treatment plant and the CMCMUA costs associated with treating and disposing of the sewage. The current rate is $24.0083 per 1,000 gallons. The total PSTAC fee is included within the Sewer Service Charge on your bill. The PSTAC currently represents approximately 68 percent of the Sewer Service Charge.

The CMCMUA designed and built the 45th Street Waste Treatment Plant in the mid-1970s to handle the tremendous peak flows Ocean City generates during the summer months. The CMCMUA develops its annual user charge based on the previous year’s sewage flows to the treatment plant during the summer quarter (July, August & September). New Jersey American Water Company utilizes the same methodology as the CMCMUA, where they bill their customers in the current year based on the prior year’s summer consumption. This approach attempts to match the charges from the CMCMUA with the revenues received from its Ocean City customers. Their Sewer Service Charge is structured on the same basis, and ensures that everyone will share proportionately in the CMCMUA’s actual costs of owning, maintaining and operating their Ocean City Waste Treatment Facility.

Why am I being billed for sewer services when I am not there or utilizing the property?

Sewer service charges are billed to all customers regardless of the volume of water utilized that month. You may only be a seasonal resident and do not utilize the water service or experience any water volume during certain months of the year, but you are still being billed for the sewer service charges monthly. The annual Sewer Service Charge is based on the water usage billed during the prior summer quarter (July, August & September) and covers the fixed costs associated to provide the sewer service. New Jersey American Water Company realizes that this annual charge could be burdensome to some customers, if full payment were to be required on a once a year basis. Thus the City and the water company agreed on a billing plan that would spread the payments out equally over a 12-month period, so that customers are billed 1/12th of this charge each month throughout the calendar year. The Sewer Service Charge represents New Jersey American Water Company’s fixed costs to operate and maintain the waste collection system and the actual cost to collect the sewage, as well as the fee billed by the CMCMUA to treat, and dispose of the sewage. Over the years there has been much controversy concerning these set charges and how they are billed out annually. What must be understood is that in the end the water company will be entitled to recover their actual cost and that the charges will remain the same no matter if they are billed in one lump sum or spread out in 12 equal payments. For the average property owner it appears to be more desirous to have the payments spread out equally and to afford them the opportunity to budget the cost over the entire year. In a way, it is a type of budget plan, similar to what is currently being offered by other public utilities for the services that they provide. The only difference is that the entire City is on the same plan and that it was negotiated on your behalf by City representatives at the time the new processing plant was built in the mid 1970’s.

The Sewer Service Charge Calculations for the Calendar Year 2015 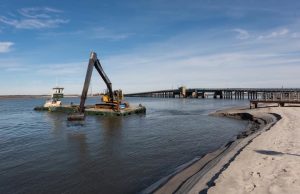 MediaWize - March 2, 2021
0
One of the Deauville Inn’s last winter projects is well underway and will soon provide a safer environment for boaters and wildlife alike, the historic Strathmere restaurant announced in a press release. Over the past year, the Deauville Inn’s team has been working closely with federal, state and local agencies and officials to ensure the dock project adheres to all laws, regulations and codes, according to the release.