When Cape May County Zoo officials asked the public to donate leftover Christmas trees — minus the ornaments, of course — for the animals to nibble on and play with, they got a lot more than they expected.

The zoo became a winter wonderland of trees placed in several of the animals’ enclosures. 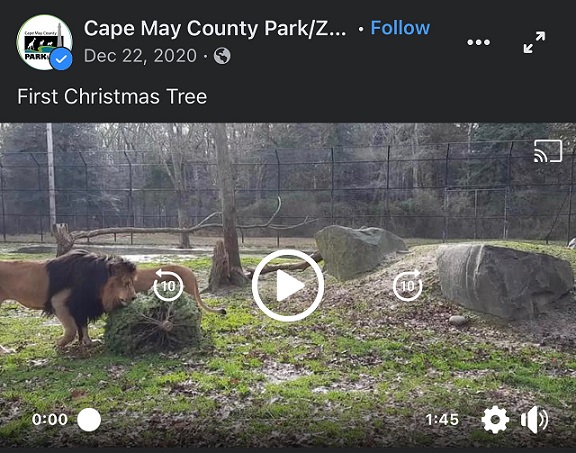 The donated trees piqued the curiosity of the monkeys and the goats and even became a delicious, albeit, prickly snack for the bison.

Back on Dec. 22, the zoo put out a Facebook video of the lions, Lex and Bella, playing with a Christmas tree.

The zoo staff asked for people to give their trees to the zoo and that they would be accepting them until around Jan. 10. But an overwhelming outpouring of tree donations came in by just the first week of January.

“It is amazing. The Christmas tree initiative is just another example of how they work to keep the animals engaged,” said County Commissioner E. Marie Hayes, the liaison to the Cape May County Park & Zoo. “This is an example of the dedication to the animals by the directors and the employees.”

Zookeepers posted on Facebook some of the ways the animals have enjoyed the donated trees. Camels and goats really like to eat them. Deer and wallabies use them for protection against the winds, bison head-butt them and lions pick them up and carry them around. Monkeys like to find hidden food in them put there by zookeepers.

Residents from local communities even got their neighbors involved in the zoo’s Christmas tree initiative.

Ocean City resident Jocelyn Palaganas, president of the Ocean City Parent Teacher Association, posted on her Facebook page on New Year’s Day, “Happy New Year Facebook friends. Bill and I will be collecting live trees in Ocean City this weekend and delivering it to the Cape May Zoo. Hope to fill up a small trailer.”

Palaganas said that she and her family, collected over 40 trees, which was two trailer loads.

She said on Facebook, “The second load went straight to the giraffe house…going to need a bigger trailer for next year. O.C. residents are the best around!!!”

Palaganas said in an interview Thursday that she knew people would want to donate their trees. She and her husband, Bill Westerman, were happy to transport them down to the zoo.

“It’s such a good cause,” Palaganas said of giving the trees to the zoo for the animals to enjoy. “Bill and I decided this will be an annual thing for us for sure.”

Based on donations that came pouring in from Ocean City and other towns, the zoo posted on its Facebook page the first week of January that it was appreciative of the trees but that it had reached its goal sooner than expected and did not need anymore.

Families enjoyed watching the spectacles as much as the animals seemed to like the Christmas trees.

One Facebook poster, Rachel Lynn, said, “We visited last week and our three-year-old was so curious about the trees. He saw the bison eating them and was amazed that it didn’t hurt their mouths!”

Throughout the COVID-19 pandemic, Commissioner Hayes emphasized that the zoo kept the animals engaged and the public informed, educated and entertained with videos and a Virtual Zoo School.

When the zoo reopened, the staff kept going with ways for people to continue to enjoy the zoo from their homes or in person while adhering to health and safety guidelines.

“They realized with the shutdown we would suffer a financial loss, so they developed fundraising initiatives to help,” Hayes said. “They never missed a beat during the shutdown, and the animals were well-cared for.”