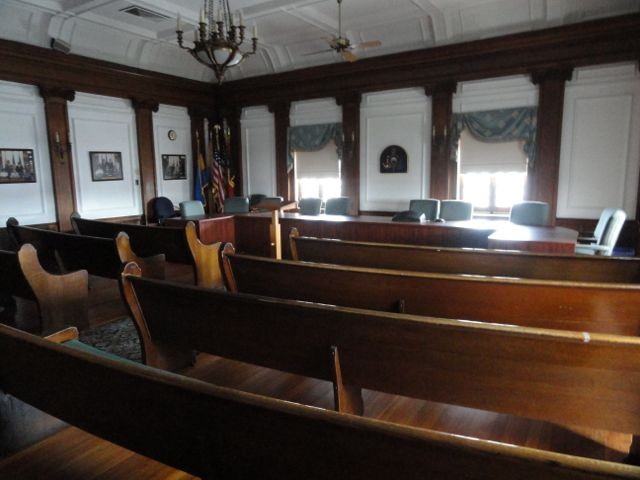 Ocean City’s century-old Public Safety Building, once seemingly fated for demolition, would instead be saved, modernized and expanded under a plan proposed by Mayor Jay Gillian.

Gillian’s administration will seek City Council approval Thursday night for an architectural contract to design a makeover of the antiquated building at Eighth Street and Central Avenue.

“This is just the first step in a process to modernize a facility that is now more than a century old and completely out of compliance with federal flood requirements,” Gillian said in his weekly message posted on the city’s website.

He explained that the project would include extensive renovations to the upper floors of the building and construction of a new addition next to it. Ground-level parking would be created beneath both structures.

The brick building, a former school, houses the police department and municipal court. Its renovation and expansion into a modern complex reflects the city’s commitment to public safety, the mayor said.

“For the sake of the public and police department, I feel it’s important to move forward with this important project,” he said in his statement.

Last January, Gillian had proposed replacing the old building with an entirely new structure as part of the city’s five-year, $98.5 million capital plan. At that time, he had proposed spending $1 million this year for designs and engineering, followed by the construction of a new $9 million building in 2017.

The project was proposed on land across the street that currently serves as a parking lot for City Hall. Gillian, though, backed away from that plan after local merchants complained it would rob the downtown business district of parking.

The revised plan to save and expand the building does not eliminate any parking. In addition, it would not require the purchase of land or affect any other parts of the city, Gillian said.

By reconstructing the building, the city will preserve a historic landmark and make it resistant to flooding, he noted.

“It will help the city meet the required 500-year flood requirement for a public safety building,” he said. “It’s the most cost-effective approach.”

The estimated price tag of the building’s renovation and expansion has not yet been announced. More discussion is expected at Council’s 7 p.m. meeting Thursday at City Hall.

Council will consider approving a $106,500 contract for Czar Engineering LLC of Egg Harbor Township to design the project. Czar will also conduct a cost analysis.

Also on Council’s agenda is an ordinance that would require the city’s historic homes to fall under the same propery maintenance requirements as every other house in town.

The measure brings historic homes in line with the property standards that apply to non-historic residential and commercial buildings.

It would ensure that the city’s property maintenance code applies equally to every building, historic or otherwise, Business Administrator Jim Mallon said.

Mainly, it would allow the city to issue violation notices to the owners of historic homes if their property becomes unsightly, such as overgrown grass or trash in the yard, Mallon said.

Council introduced the ordinance in October. A public hearing will be held Thursday before Council is expected to take a final vote on the measure.

The ordinance would incorporate the homes within the Historic District under the umbrella of the city’s property maintenance code. The district’s boundaries roughly run from Third to Eighth streets between Ocean and Central avenues, although there are some offshoots.