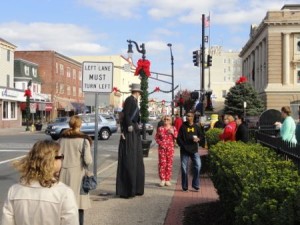 A stiltwalker chats with Earlier Than the Bird shoppers in November in Ocean City. The promotion is made possible with Special Improvement District funds.

Council on Dec. 17 approved a $513,448 first reading of the budget for the SIDs. The budget – which is funded by assessments on businesses within the SIDs – goes to the advertising and promotion of various events each year, including fall and spring block parties, fall fireworks, Mummers nights and more.

City Council has a full agenda for its meeting 7 p.m. Thursday at City Hall, and here are some other agenda items:

For complete documentation on all agenda items, see agenda packet below.