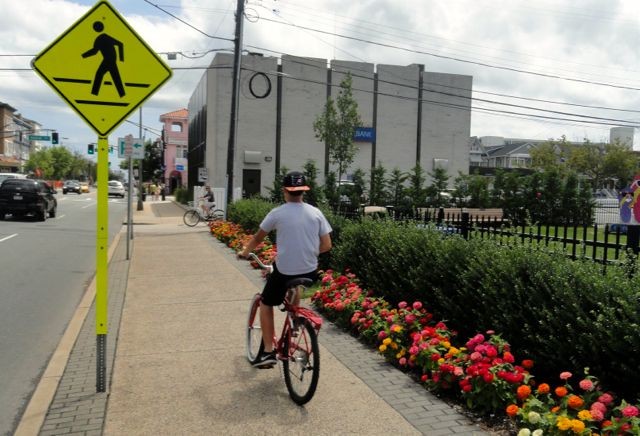 A bicyclist rides on the sidewalk on Ninth Street between Asbury and Central avenues on Aug. 11, 2014.   Credit: Tim Zatzariny Jr.

A risky game of chicken plays out frequently on the sidewalks of Ocean City.

Bicyclists come face-to-face with pedestrians, and often neither is sure who should back down first. This can force bicyclists and pedestrians to veer into the street and into the path of oncoming traffic.

It’s an especially big issue in the summer, when the 11-square-mile island’s population swells to more than 150,000 people on weekends and streets are narrowed by endless lines of parked cars.

Although city police say there are only a handful of collisions each year between pedestrians and bicyclists, concerns for the safety of both is growing as more and more riders pedal the streets.

“Ocean City is a bicycling friendly community,” said Drew Fasy, a member of the local bicycling advocacy group Bike OCNJ. “We’re just trying to make it better and safer, and it’s a process.”

There’s no state law that prohibits riding bicycles on public sidewalks, so whether it’s illegal is up to individual municipalities.

An Ocean City ordinance specifically prohibits bicycle riding on Eighth Street’s sidewalks from Atlantic Avenue to the Boardwalk, and on Asbury Avenue between Sixth and 12th streets  in the city’s downtown. Violators face a fine of $30.

Even in areas of the city where it isn’t illegal, bicycling on sidewalks is strongly discouraged.

“There’s two side to that coin,” said Fasy, who was involved in the city’s efforts to create a bike route on Haven Avenue between Ninth and 34th streets. “People ride on the sidewalk because they don’t feel the streets are safe, thereby creating an unsafe condition on the sidewalk. The answer is we need to make our streets safe, so people feel safe riding on the streets.”

“In the common-sense world, if I have two small children, where would I rather be? Riding with my children in the street, or on the sidewalk?” Ang said.

Bicyclists are subject to the same traffic laws as motorists in New Jersey.

Ocean City will give verbal warnings to bicyclists who commit infractions such as failing to yield to a pedestrian at a crosswalk, but they don’t frequently issue tickets for those violations, Ang said.

“The last thing we want to do is be out there writing tickets (to bicyclists),” Ang said, since many of them are vacationers.

“Our purpose is to make sure everybody is safe, and goes home with a memorable experience.”

An informational brochure about bicycling in Ocean City, including safety tips, is headed for a second printing after more than 25,000 copies of the first run were distributed over the past two years, Fasy said.

“They’ll go into the vacation bag renters get when they check in,” he said.

The hope is to educate bicyclists on the proper places to ride in the city.

Bicycling on downtown sidewalks can be especially hazardous, Ang said.

“As you’re walking out a store, you don’t want to encounter a bicycle coming down the Avenue.”

This presents a quandary for merchants, who encourage shoppers to pedal downtown, although there’s no designated place for bicyclists to ride.

“The sidewalks aren’t wide enough to accommodate both bicycles and the shoppers,” said Paul Cunningham, co-chair of the Ocean City Downtown Merchants Association. “It’s a double-edged sword, because then (bicyclists) ride on Asbury and (the street’s) not wide enough for bicycles. It’s a problem that’s hard to address. We certainly want to encourage people to ride their bikes downtown, but we also want them to be safe.”

Members of the Merchants Association continue to discuss solutions to the lack of bicycling options downtown, said Cunningham, the owner of P. Francis, an upscale gift store on Asbury Avenue.

One partial solution, he said, is to keep adding bicycle racks near downtown intersections.

“It still encourages bicyclists to come downtown, but it gives them a place to park their bikes and walk,” he said.

The city is offering anyone who’s interested the opportunity to buy bike racks with memorial plaques at popular locations or businesses. A $600 donation includes four lines, with 20 characters per line. (Call Wendy Moyle at 609-525-9301 for more information.)

Riding to the Beach

Although the city has made major progress in creating a dedicated bicycle path across the island from north to south on Haven Avenue (including a new user-operated traffic signal that helps bicyclists and pedestrians cross Ninth Street) there’s still no dedicated path to get from west to east for bicyclists pedaling to the beach and boardwalk.

The Route 52 (Ninth Street) causeway includes a shared-use path for pedestrians and bicyclists. But “one of the biggest obstacle we’ve encountered is, how do we get people from Ninth Street and Bay Avenue across town to the Boardwalk?” Ang said.

“Our infrastructure was built many, many years ago” and Ninth street isn’t wide enough to accommodate a bicycle path all the way to the Boardwalk, he said. “We’re trying to make changes that won’t infringe on the flow of traffic, but will create a safe haven for bicyclists.”

Fasy, the local bicycling advocate, said there’s been discussion about using the wide sidewalks on the south side of Fifth Street and the north side of Sixth Street to create a multi-use path connecting Haven Avenue to the Boardwalk. Those sidewalks border a green corridor including the Ocean City Tabernacle, Veterans Memorial Park and Ocean City High School.

“Although there are improvements needed, that could be a good connector route between the (existing) bike path and the Boardwalk,” he said.

“In the big picture, we’re trying to do this as money allows,” Fasy said. “The city isn’t setting aside large chunks of money to improve bicycle infrastructure. What they’re trying to do, and I think they’ve done a very good bit of it, is implementing (bicycle-related) improvements as road improvements occur and as grant money becomes available.”

She said a dedicated east-to-west path would make getting to the Boardwalk safer and easier for bicyclists.

DeMarco, a regular visitor to Ocean City from Woodbury Heights, Gloucester County, said she feels safer riding on the sidewalk, but “if people are walking, I don’t. If nobody’s there, I don’t think it’s a problem. If I see (pedestrians) there, I get off” the sidewalk.

“When I’m a pedestrian, I would at least hope people would show me the same courtesy. But they don’t always.”