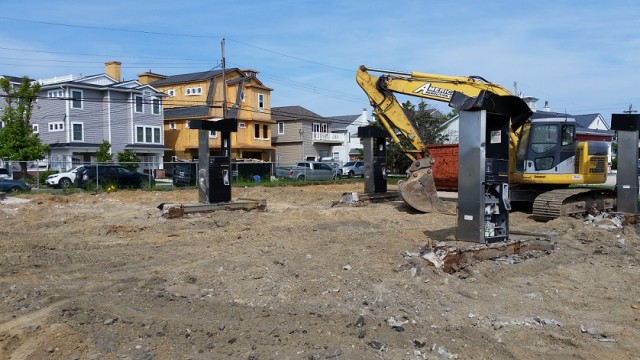 Ocean City officials are relieved that one eyesore has been removed from the resort’s main gateway and are looking forward to the demolition of another blighted property next door.

Together, the abandoned BP and Getty gas stations formed a stark image for visitors leaving town via the Ninth Street causeway. The ghostly buildings were literally the last things motorists would see before heading out over the bridge.

But the BP station was demolished on Thursday, the first step in the city’s plans to buy the property and transform it into green space.

Jim Mallon, the city’s business administrator, said people have already been calling City Hall to celebrate the demise of the hulking BP building.

The old BP and Getty sites, as well as an abandoned Exxon gas station on the opposite side of Ninth Street, clash with Ocean City’s reputation as a family-friendly tourist destination. City officials have long been concerned about the impression the decrepit properties have been making on visitors entering and leaving on the Ninth Street corridor, the town’s main artery.

Mallon stressed that other businesses are thriving in the rest of the Ninth Street corridor, as well as on the Boardwalk.

The demolition of the BP’s old building and overhead canopy that covered the gas pumps comes just three weeks after City Council approved a $475,000 bond ordinance to buy the property.

As part of the deal, the current owner, SAE New Jersey Realty Co. LLC of Pennsauken, has agreed to remove the station’s old underground gasoline storage tanks before turning over control to the city.

Mallon estimated the city will take possession of the property in July. In the meantime, he said SAE has been cooperating with the city to eradicate any potential environmental hazards associated with the former gas station.

“We want to make sure we get a clean site,” Mallon said. “We don’t want to have taxpayers on the hook for any problems.”

Once the city acquires the property, it will landscape it to create green space. The site will also be converted into parking for the surrounding residential neighborhood along Revere Place. There will also be parking for people who use the Ninth Street causeway for recreational purposes, such as walking, jogging and biking.

Separately, the city is negotiating to buy the old Getty station next to the BP site and also wants to turn it into green space. Mallon expressed optimism the city will aquire the Getty site, but he could not estimate how long it would take to conclude a deal with the current owner, Trinetra Realty Holdings New Jersey Delaware LLC of Princeton.

In addition, the owner of the Bud’s Marina property adjacent to the BP and Getty stations has expressed interest in selling, which would create an even larger footprint for open space along the Ninth Street corridor.

The old Exxon site at the corner of Ninth Street and Bay Avenue is expected to be redeveloped later this year into a multimillion-dollar office building for the Keller Williams real estate firm.

Mallon said negotiations for the Exxon property are private and do not involve the city, so he didn’t know their status. However, he said the city is hopeful the site will be cleaned up and redeveloped.