Be it virtual, hybrid or in-person, getting ready for back-to-school is not an inexpensive prospect.

The Cape May County Coalition for a Safe Community plans on making the return to school a bit less financially stressful for folks in need in Ocean City and also throughout the county with a free book bag and school supplies giveaway Wednesday.

Pastor Thomas Dawson, senior pastor of the SOAR Church in Woodbine, who also spearheaded free facemask giveaways in Cape May County recently, is the lead organizer of the book bag project.

The event takes place from 4 to 6 p.m. on Wednesday at the cottages at Pecks Beach Village in Ocean City. The cottages are located between Fourth and Fifth streets, just west of West Avenue.

The free book bags contain needed school supplies as well. People may walk up or drive through to receive their bags. Those walking up must wear a mask, organizers stressed.

Dawson has dubbed such efforts as “promoting unity in our communities.” According to the church Facebook page, more than 700 children will receive a free book bag.

“Even during the best of times, many families struggle to obtain all of the school supplies they need for their kids,” said New Jersey Assemblyman Antwan McClellan, an Ocean City resident who served as a member of City Council from 2012 until earlier this year.

McClellan stepped down from Council following his election to the Assembly. He is serving as the local liaison for the backpack giveaway program. He will help identify Ocean City residents who could benefit from the program and facilitate their participation.

“During this COVID-19 crisis, it’s especially tough for some of our families to make ends meet,” McClellan said.

“The goal of this project is to make it less difficult,” he added. “A free backpack and few school supplies is a big deal for many of these families. It takes care of a major concern as their kids get ready to continue their education.”

Ocean City Second Ward Councilman Tom Rotondi also stepped up to help with the event, McClellan said. Rotondi, who is just two months into his first term on City Council, made a personal contribution to the cause. He is donating additional book bags and supplies, McClellan said.

Rotondi got 50 book bags donated by the Hand to Hand Mission to Haiti Organization under the leadership of Father Yvans Jazon.

The number of free bags and school supplies are limited during the giveaway, McClellan noted.

“With that being said, the hope of this project is to help as many of our people as possible going into a new school year during a national health and economic crisis,” he concluded.

In addition to Ocean City, the free book bags will be available at the following Cape May County locations, also from 4 to 6 p.m. Wednesday: 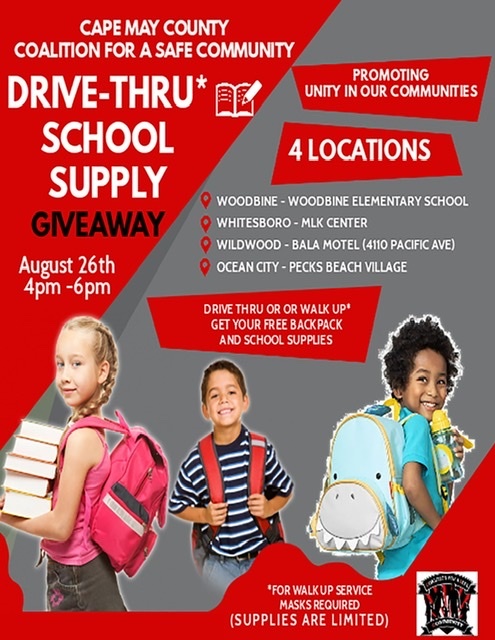 mvitale - March 4, 2021
0
Ocean City is making bulkheads a major focus of flood prevention efforts, strengthening its regulations and creating a new program to help pay for maintenance and replacement for property owners in hardship cases. City Council introduced an ordinance in a 7-0 vote amending the city’s code on bulkhead repairs at its Feb. 25 meeting. Before, a property owner was required to fix a bulkhead that could pose a danger to their property or another neighboring residence. The ordinance, which still has to go for a second reading and final vote, would expand the reach for the homeowner to also protect nearby homes from a deteriorating bulkhead.