Rich Fluri, his wife, Dyann Paoline, and their friend, Susan Cox, decided to stop by the Crab Trap in Somers Point for a drink after their volunteer emergency response training.

Little did they know their newly learned skills to assist others in times of crisis would be put to the test, before they even graduated from their CERT training course for Ocean City-Upper Township’s Community Emergency Response Team.

“We all heard this guy fall back off his stool,” Fluri said, while seated at the Ocean City Free Public Library Community Center, 1735 Simpson Ave., during a graduation ceremony for CERT trainees. “I went over to him to see if he was responsive. He was, so he didn’t need CPR.”

Paoline observed and made sure she and her husband and friend, all from Ocean City, followed protocol they were learning through the CERT program.

“It was scary,” Fluri said.

But when emergency responders arrived, and the man was going to be fine, Fluri said the three realized what a good job they did. “It felt good,” he remarked. 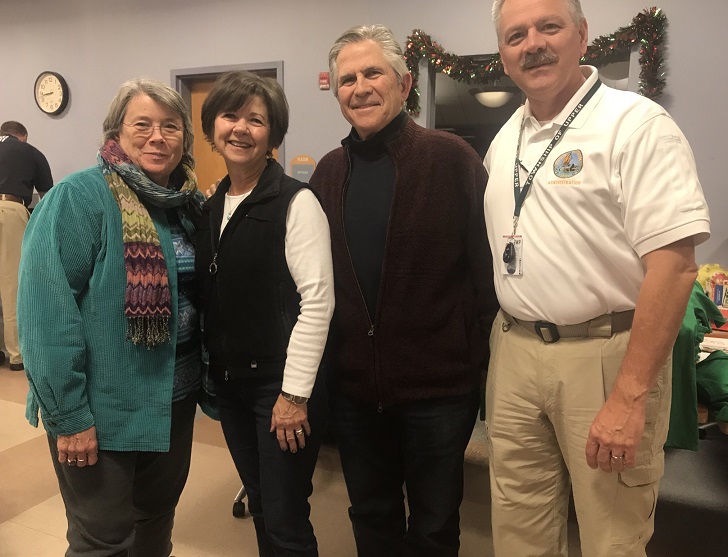 CERT volunteers supplement first responders, provide aid to victims, organize volunteers at disaster sites and collect intelligence for emergency professionals. They go through a rigorous 12 weeks of training, including instruction on emergency communications, storm evacuation, firefighting, assessing damage to buildings, taking care of pets during disasters and medical treatment. There is also a training component on how to respond to terrorism.

Paoline said she and her husband decided, after the recent hurricanes, that they wanted to do something to help their community when weather strikes.

Frank Donato, Ocean City’s chief financial officer who also serves as the town’s emergency management coordinator, said since 2005, the CERT program has grown. Now CERT membership tops 200, with 40 active members. He said this year’s graduating class is the biggest ever, which he attributes to the tumultuous weather throughout the country this year.

“It was in everyone’s mindset. I think it sparked a lot of interest in people to volunteer,” Donato remarked.

Smith said it isn’t just about training people to assist the responders, it is also about giving people the knowledge to help themselves.

“We are not looking to make these volunteers first responders. But this training could help them with their families,” Smith said.

Donato said the trio who helped the man at The Crab Trap is proof that the CERT program really works. “As limited as this training is, it gives you the confidence to slow the scenario down and you call 911, you grab the AED (defibrillator) – not just lock up and panic. It gives you that confidence,” he said.

Officials presented Fluri, Paoline and Cox with graduation certificates along with the other Ocean City and Upper Township residents who took the course.

“The sheer size of your class – you’re the biggest class,” Donato said, moments before presenting everyone with their certificates. “There were a lot of Tuesday nights out of your personal lives and it is really appreciated.”

Retired nurses, social workers firefighters and law enforcement, librarians and others in all different careers volunteer to become CERT members every year. Donato and the other officials work with them to determine what areas they may be best suited for.

Much of the CERT training revolves around coastal storms in the area.

Prior to the graduation, retired National Weather Service meteorologist Jim Eberwine, of Absecon, gave a presentation on the various storms that hit the coast from 1903 to the present and the impact of Hurricane Sandy in 2012.

“Most disasters are weather-related, and people need to know what they may be responding to,” Eberwine said. “The idea is to give them a heads-up about the coastal events we have had from 2011’s Hurricane Irene and 2012’s Hurricane Sandy.”

According to the New Jersey Office of Emergency Management website, the CERT concept dates to 1985, when the Los Angeles Fire Department realized that in the early stages of a disaster – particularly earthquakes – professional emergency responders are often overwhelmed and need help from community volunteers trained to deal with catastrophes.

The Federal Emergency Management Agency later recognized the importance of expanding the CERT program nationwide and crafted a training model.

At the end of the ceremony, Donato told members of the graduating class that they will be added to the database, so they may be called upon to help with everything from parades to assistance during storms and other emergencies.

Donato also said it is important that there is an Upper Township contingent of CERT members, especially since CERT volunteers often help with emergency shelters.

“It is great to have CERT members offshore who live on higher ground,” he said. “This is a great collaborative effort and a great partnership between Ocean City and Upper Township.”

For more information about the CERT program, contact Frank Donato at 609-399-0202 or email him at fdonato@ocnj.us.