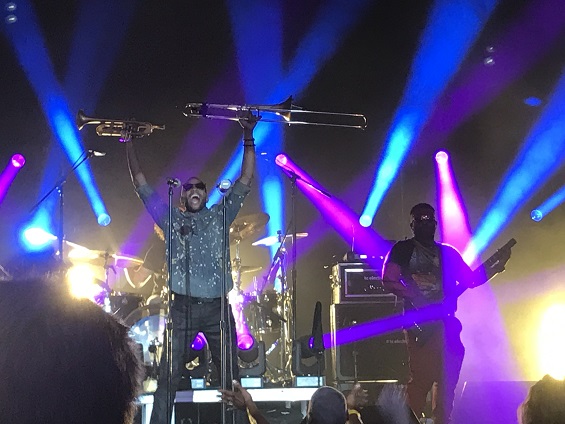 Despite the calendar reading June 9, Trombone Shorty & Orleans Avenue made sure the kickoff of Summer Concert Series 2017 at Ocean City Music Pier, was like the 4th of July.  A strong opening set by New Breed Brass Band set the tone for an evening of funky, New Orleans horn-driven, genre-bending, musical gumbo. At a quarter to nine, Troy “Trombone Shorty” Andrews and his band of merry men, took the stage. “What’s up, Ocean City, you ready to party?!?” Shorty asked the crowd, which responded enthusiastically in the affirmative, just as he and the crew blew in with their aptly titled instrumental “Hurricane Season”. 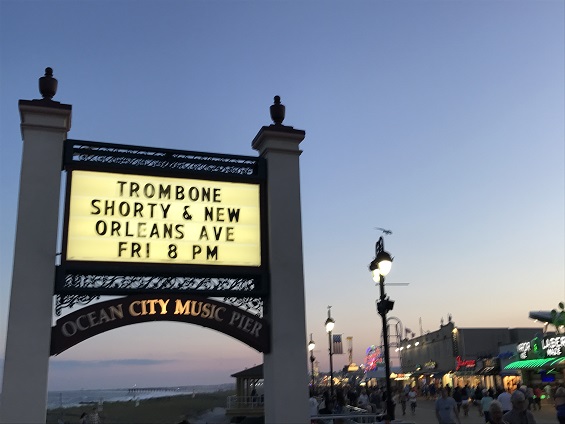 On a warm Friday evening in Ocean City, with a full moon illuminating the sea’s shore line directly behind, the crowd along with the band onstage, road the wave. What followed was a dizzying cocktail of Crescent City, and Shorty’s own, rich musical heritage, beginning with the late great Allen Toussaint’s “On Your Way Down” and ending on The Meters’ classic “It Ain’t No Use”. The blended effects in between, on a crowd from ages 4 to 88 in a dry town, were intoxicating. 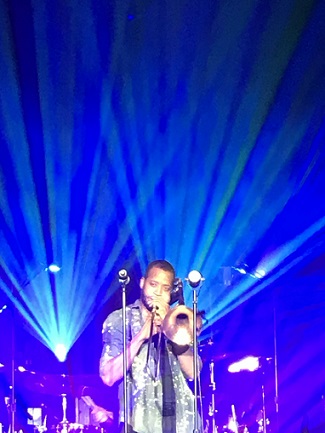 A trombone and trumpet-playing prodigy from New Orleans’ cultural hotbed Treme district, playing second lines and accompanying Bo Diddley on a New Orleans Jazz & Heritage Festival stage at age 4, it’s almost scary to consider that Trombone Shorty might just now at 31, be entering his prime. Yet if last night’s show, or his recently released Blue Note Records debut, Parking Lot Symphony, his best since 2010’s Backatown, are any indication, he truly may be. 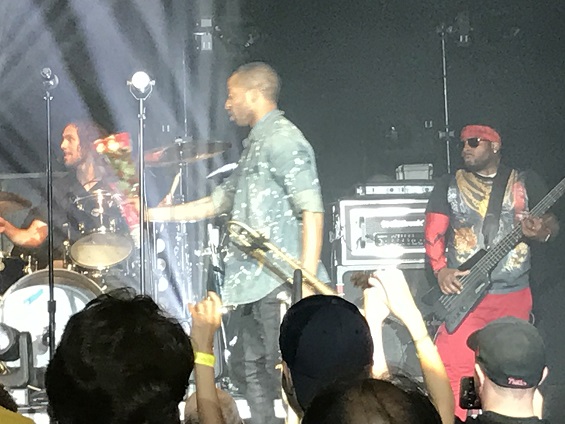 Now entering a second season covering the summer concert schedule for OCNJ Daily, I can say without hesitation that Friday night’s show, featured the highest percentage of standing patrons of any OC Music Pier crowd. They also spent the longest amount of sustained time on their feet, moving and grooving. As Shorty devotee Angela Johnson, front and center all evening, declared with satisfied laughter, “We sat in our chairs…until the band came on”. Johnson, in town from Silver Spring MD, has attended at least one Trombone Shorty and Orleans Avenue show “every year” for a decade, in locales ranging from Clearwater FLA, to Hampton VA, New Orleans LA, and now Ocean City NJ. This weekend’s Ocean City show was particularly special, since she brought longtime best friend Denaise Seals, up from Northwest DC on I-95 North with her, to celebrate Denaise’s birthday, as the pair spend a boardwalk-based weekend at The Harris House. 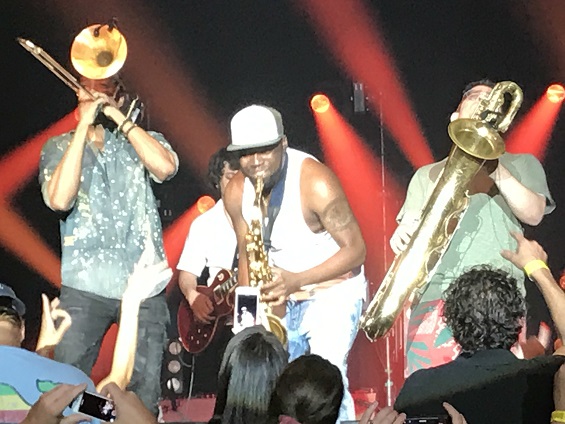 Throughout the evening, Troy “Trombone Shorty” Andrews exhibited his musical dexterity on both of his chosen brass weapons, while displaying a supreme bandleader sense of showmanship, via his singing and crowd work. During his recent “Here Come the Girls”, Shorty prowled the edge of the stage and sung the title into fruition. Once he had the adoring flock at his attention, he was passing out Mardi Gras beads to those flanking the stage during “Long Weekend”, which featured a blistering trombone solo, plus a deft interpolation of Kool & The Gang’s roller-rink anthem, “Get Down on It”. On “Where Y’At”, Shorty’s call-and-response staccato sounded closer to rap, before the band seamlessly shifted into the intro segment of the Jackson 5’s “I Want You Back”. Towards the end of the show, Shorty even slid behind the drum kit and quite literally didn’t miss a beat. 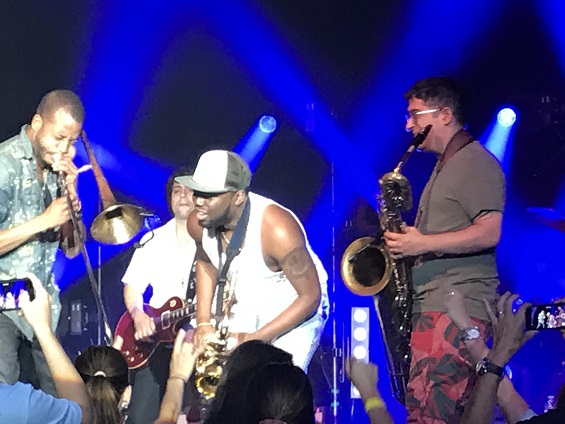 If he hadn’t earned his stage name as a youth, he could’ve just as well been known as Trumpet Shorty. He is equally adept on that smaller, non-slide instrument. During the slow, jazz-blues build of “Laveau Dirge”, Shorty delivered a trumpet solo, deploying his free hand as a mute, along with seemingly every ounce of breath he had left, that would’ve made Louis “Satchmo” Armstrong proud. Meanwhile, in the space between lingering gust-filled notes, you could hear “whoooh!”, “what?!” or “ugh!”, bubble up inside the crowded concert hall. Shorty was not the only ace musician onstage in nearly two hours of show time. Each member of his five-piece accompanying band since 2009, Orleans Avenue, was a gifted player in their own right and made the most of their time to shine.  Jersey native “Freaky” Pete Murano shifted from chicken-grease rhythm guitar on “Where It At”, to white-hot Hendrix-like leads on “The Craziest Thing”. Drummer Joey Peebles kept time with seemingly boundless energy, while his long hair flew everywhere and flop-sweat could be seen splashing as his cymbals crashed. Ninth Word N.O. native “Uncle” Dan Oestreicher’s baritone sax, like his physical frame, loomed large in the evening’s proceedings. Mike “Bass In Your Face” Bailey, truly earned the nickname, particularly during an extended solo on “One Night Only”. 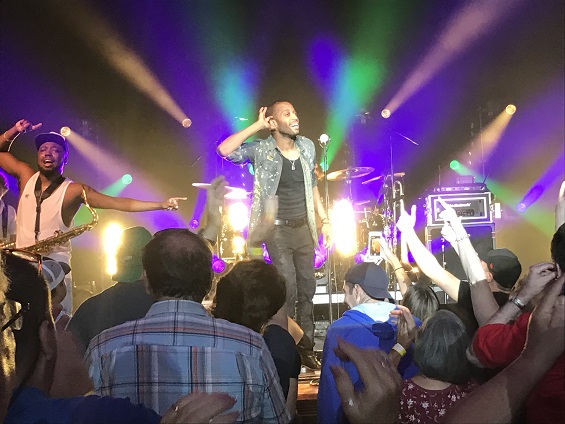 Last but certainly not least was the most recent addition, Bernard “BK” Jackson. BK is a Tampa-bred, 25-year-old tenor saxophone wizard, hired into Prince’s NPG Orchestra while in college at FAMU back in 2012. Moving continuously through the night, he rose to the challenge Trombone Shorty issued when asked to “give him some Maceo Parker”, launching into a James Brown medley that included parts of “Cold Sweat”, “Get Up Offa That Thing”, “I Got The Feeling” and “I Feel Good” among others. During Jackson’s final solo on the set-closing “It Ain’t No Use”, Shorty took rhythmic respite behind the drum kit, BK snuck in horn licks from Outkast’s “Spottieottiedopalicious”, Herbie Hancock’s “Chameleon”, and once Shorty returned to trombone, all three horns blasted off into the wordless melody of Suzanne Vega’s “Tom’s Diner” chorus in unison. 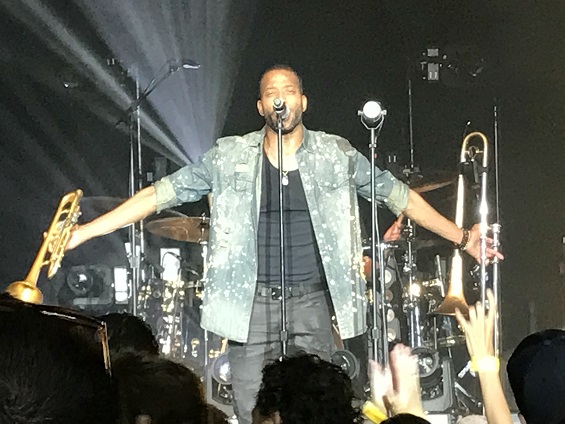 As the joyful noise finally came to an end, performers and patrons looking happily spent, Shorty took a bouquet of flowers from the grateful audience while each member of the group took turns tossing out gifts to the crowd including t-shirts, beads, guitar picks and drum sticks. “Thank You, Ocean City, from right here all the way down to New Orleans…we love you and we’ll be back soon!”. Judging by the standing ovation and smiling faces filtering out of the Music Pier, it’s safe to say Ocean City loves him and New Orleans too. In fact, the next time Trombone Shorty & Orleans Avenue return to play a show, OC Summer Concert Series promoters Bob Rose & BRE Presents may want to considering booking two, to give the Jersey Shore one more summer day, of laissez les bons temps rouler. 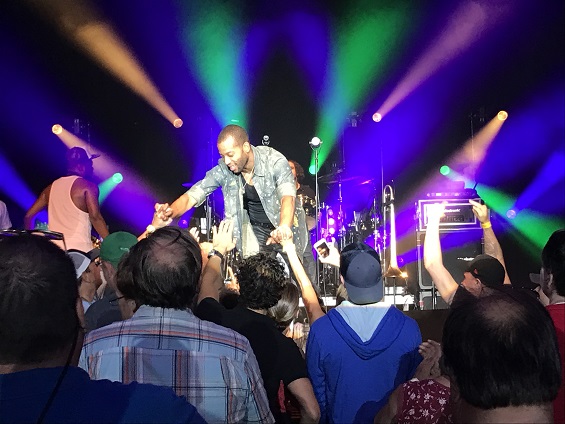