Only the girls freshman-eight advanced to the final round of competition. They were the only boat of the nine Cape May County and Atlantic County crews who qualified to earn a medal at Nationals. Their boat finished the 1,500 meter race in 5 minutes, 24.09 seconds. New Trier of Winnetka, Illinois, won in 5:09.84 and Saratoga, New York, placed second in 5:12.65.

Ocean City High School Crew Girl’s Head Coach Ian Tapp says, “It was a great season. All the girls worked unbelievably hard and they all deserve the success they received. The goal is to take this success and build off of it in the years to come. It was truly a remarkable year and I couldn’t have imagined to work with such great rowers, coaches, and parents.”

The SRAA Nationals Regatta marks the end the spring high school rowing season. Ocean City High School Crew’s head coach, Mike Millar says, “We are a young team with a lot of potential. We are already thinking about and preparing for next spring season.” OCHS Crew Team competes in the spring, but offers fall and winter training for our high school athletes as well.

OCHS Crew also hosts a Youth Summer Camp, for budding boy and girl rowers aged 12-14. Last summer, some of the girls who make up our current freshman-eight boat were learning how to row for the first time at the Ocean City Crew Boosters Summer Youth Crew Camp. Today, they are the number 3 girls freshman-eight crew in the nation. For more information about OCHS Crew or the Youth Summer Camp, check out their website at www.ochscrew.com. 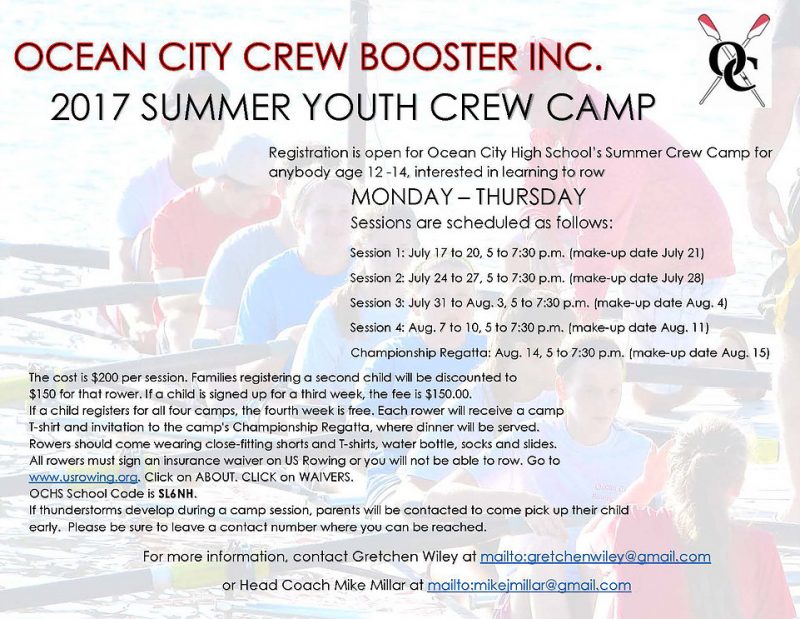